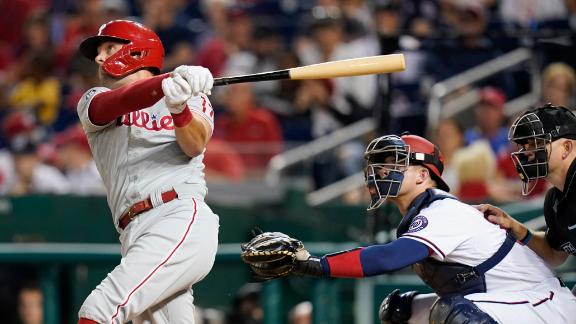 WASHINGTON -- - Rhys Hoskins homered and drove in three runs, Didi Gregorius hit a two-run homer and the Philadelphia Phillies extended their winning streak to four games with a 9-5 victory over the Washington Nationals on Wednesday night.

The Phillies erased an early 3-0 deficit and set up a chance for a four-game sweep on Thursday afternoon.

"I don't think there was much of a change in the dugout," Hoskins said. "It's the third inning. We've seemed to be able to score a lot early and score a lot late throughout the season.

"We, as a group, didn't miss pitches in the middle of the plate the next time through."

Nationals reliever Jefry Rodriguez hit Hoskins with an up-and-in pitch in the top of the seventh. Hoskins motioned to the Phillies' dugout, then looked at Rodriguez before going to first base. Gregorius hit a 412-foot home run on the next pitch. Hoskins began yelling at Rodriguez before the ball cleared the fence, prompting Rodriguez to yell back.

Philadelphia used four doubles to build a four-run fourth inning and take a 4-3 lead. Andrew Knapp, Travis Jankowski, Jean Segura, and Hoskins all doubled in the inning. Bryce Harper drove in a run with a single.

Hoskins hit a two-run homer in the fifth inning, his 24th of the season.

Victor Robles' first career leadoff homer came on Anderson's first pitch Wednesday night. The homer was just the second of the season for Robles, a one-time top prospect who struggled in 2020 and is doing so again this season. The Nationals are using the rest of the season to assess prospects, and also giving the 24-year-old Robles a chance to bat leadoff after mostly hitting ninth in his short career.

Anderson pitched three innings, allowed three earned runs on three hits (all homers), walked one, and struck out one.

"We expect this," said Anderson of the recent run. "We went into spring training wanting to win this division."

The 21-year-old García also homered to left field in the seventh inning for his first career multi-homer game.

"It is a very good sign," García said, through an interpreter. "It's something I worked hard this offseason on a lot."

Nationals: RHP Stephen Strasburg (thoracic outlet syndrome) has rejoined the team to start his extended rehab process. The Nationals are hopeful Strasburg can join them in 2022 spring training. He has pitched 26 innings since signing a seven-year, $245 million contract after the Nationals won the 2019 World Series.