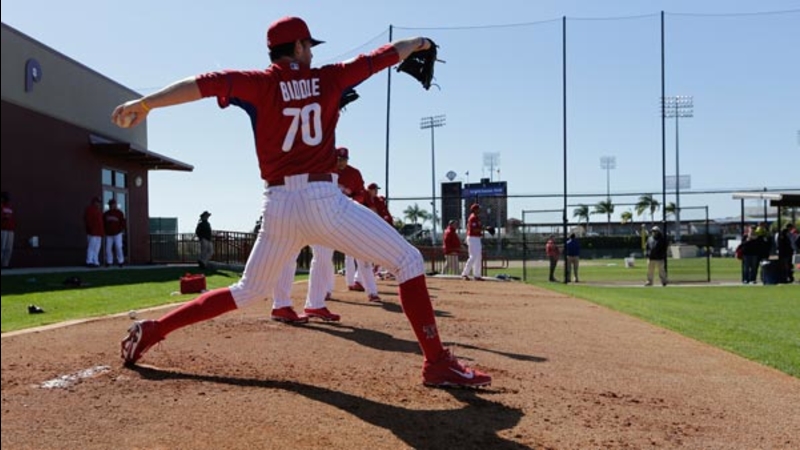 CLEARWATER, Fla. (WPVI) -- Mt. Airy native Jesse Biddle wants to throw away what was the worst year of his life.

Last May, the Philadelphia Phillies former first round draft pick was caught in a nasty hailstorm in Reading.

And even Biddle can't believe what happened as he retells the story.

"My front windshield was about to cave in. My back windshield did cave in. It kind of exploded and glass got everywhere. I couldn't see anything. I had to get out of the car; I couldn't drive it. It stopped working. I ran to find cover; while I was running, I really, seriously got blasted on the back of the head by a hailstone," Biddle said.

Biddle was bleeding and suffered a concussion.

However, the 23-year-old was eager to bounce back on the mound.

So the Phillies decided to give him a mental break and send him to Clearwater, Florida.

"2014 was tough, there were a lot times where I was getting smacked against the wall and held down, I was struggling to find air, but I feel very good and I feel I came out on top," Biddle said.

Former Cy Young Award winner Roy Halladay, who also needed a mental break early on in his career, is helping the lefty out.

"He sent me some text messages that were very eye-opening and meaningful. I saved those messages and I look at them to this day," Biddle said.

Biddle also suffered quad and elbow issues this winter, but now he says at camp, he feels as strong and as healthy ever.

Biddle is expected to start the season in Double-A Reading.