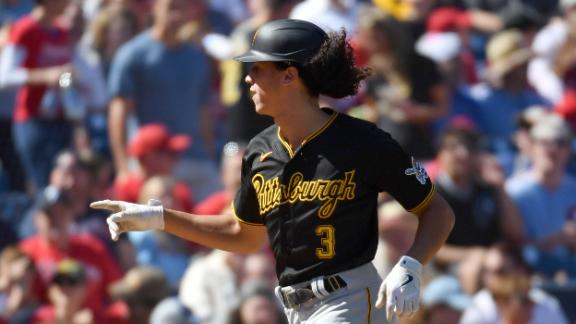 PHILADELPHIA -- - Phillies starter Hans Crouse gave up a home run to Cole Tucker on his first major league pitch and Philadelphia's playoff hopes took a hit Sunday with a 6-0 loss to Max Kranick and the Pittsburgh Pirates.

The Phillies, who had won five in a row, began the day trailing NL East-leading Atlanta by 1 1/2 games. Philadelphia visits the Braves for a three-game series starting Tuesday night.

Bryce Harper and Philadelphia finished the home portion of their schedule with a record of 47-34.

Crouse (0-1) began his big league career with a fastball that Tucker hit into the right field seats for his first home run of the season.

"I'll be honest, I was talking a lot of smack," Tucker said. "I was telling him we're going to send (it) into the stands. When I got back to the bench, it was pandemonium. Good luck to (Crouse), but it was cool to rough him up early today."

The Phillies chose to call up Crouse from the minor leagues rather than throw an actual bullpen game. The 23-year-old righty gave up two hits and walked four in three innings.

Crouse was acquired by the Phillies at the trade deadline from the Texas Rangers along with Kyle Gibson and Ian Kennedy for pitcher Spencer Howard.

Kranick (2-3) went five innings and combined with four relievers on a six-hitter.

Kranick, who in July became the first pitcher in 127 years to throw five perfect innings in his major league debut, had a second straight solid start after being recalled from the minors a week earlier. He allowed four hits, walked three and struck out five.


The 24-year-old righty, who grew up about two hours north of Philadelphia in Scranton, had about 50 family members and friends at the game.

"Too many of them are Phillies fans," Kranick said. "If today is the one reason (the Phillies) don't make the playoffs, they're going to be mad at me."

Hayes doubled as the Pirates made it 3-0 in the seventh. Reliever Jose Alvarado had an eventful inning that included a leadoff walk -- the first of four in the inning -- a balk and a wild pitch.

The Pirates added two more runs in the eighth off the beleaguered Phillies bullpen. Adonis Medina gave up a leadoff double to Hoy Park, hit Anthony Alford with a pitch and walked Tucker before Tsutsugo drove in two runs with a single.

Hayes led off the ninth with a single, went to second on J.T. Realmuto's second passed ball of the game, advanced to third on a wild pitch by reliever Ramon Rosso and scored on a balk.

ROOKIE IN, VET OUT


To make room on the roster for Crouse, the Phillies designated veteran OF Matt Joyce for assignment. Joyce, 37, missed most of the season with a lower back injury. He was just 5 for 55 (.091) with two homers and seven RBI.

Pirates: Bednar (strained right oblique) was reinstated from the IL Sunday. An important piece of the Pirates bullpen, he missed three weeks with his injury. He entered Sunday with a 2.18 ERA in 57 2/3 innings. To make room for Bednar, the Pirates optioned RHP Kyle Keller to Triple-A Indianapolis.

Phillies: OF Odubel Herrera returned to the lineup Sunday after missing Saturday's game with a sore left Achilles. Herrera aggravated the injury Friday while taking in-game batting practice in the cages behind the Phillies dugout. He was removed from the game Friday with the injury.

Pirates: The Pirates travel to Cincinnati on Monday to make up a rained-out game from last week. It will be Pittsburgh's final road game of the season. No starter has been announced yet for the Pirates.

Phillies: Zack Wheeler (14-9, 2.83) pitches the opener of the three-game series at Atlanta.