Rockets could match offer to Parsons 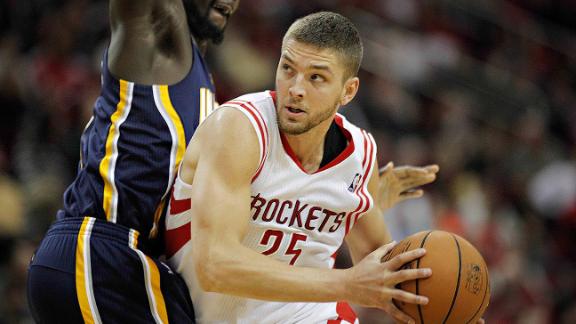 Restricted free agent Chandler Parsons has signed an offer sheet from the Dallas Mavericks for a three-year deal worth in excess of $45 million.

Several photos of Parsons signing an offer sheet were posted on a Cyber Dust account controlled by Mavericks owner Mark Cuban and the team early Thursday, when the NBA's moratorium on signing free agents ended. The photos, including one of Cuban posing with Parsons, appeared briefly just after midnight Dallas time.

The Rockets will have until 11:59 p.m. ET on Sunday to match the offer or lose Parsons.

"It's just the price of NBA poker," Nelson said of the risk of the Rockets deciding to match the offer. "You throw a card down and you got three days to see if it's going to get matched."

It remains to be seen whether Houston will match the offer while the Rockets are trying to persuade Chris Bosh to leave Miami and sign with them.

After signing the offer sheet, Parsons celebrated with Cuban, friends and family -- including his mother, Terri -- at a club near his Florida home.

Extremely humbled! One night of fun and back to work. THANK YOU to everyone who has helped me! I am blessed.

- Terri Parsons (@sadie1532) July 10, 2014Sources say Parsons' deal is likely to possess a player option after the second season -- which could make Parsons a free agent in summer 2016 alongside star Rockets center Dwight Howard -- and a hefty trade kicker.

The Mavericks have targeted Parsons to join Dirk Nowitzki and Tyson Chandler in a completely revamped frontcourt.

"In terms of free agency, whether it's restricted or unrestricted, you're looking for the top guys. And this was just a really good fit for us in a lot of respects in terms of chemistry and upside," Nelson said. "We've always liked guys that are multiskilled and know what to do when they don't have the ball, are a triple threat and all those old-school things.

"It's a really good fit for us, and we'll just have to sweat it out for three days."

The 25-year-old small forward has played in Houston the past three seasons. He was a second-round pick out of Florida in the 2011 draft.

Tim MacMahon of ESPNDallas.com and The Associated Press contributed to this report.