Sixers, minus Embiid, take on Mavs, minus Porzingis 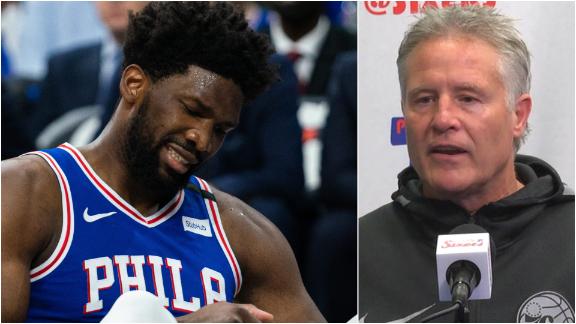 ESPN
The top two teams in the Western Conference proved to be a bit too much for the Dallas Mavericks, who will now take their chances against an Eastern Conference club.

The Mavericks will play host to the Philadelphia 76ers on Saturday, one day after dropping a 129-114 decision to the visiting Los Angeles Lakers. That defeat came two days after the Denver Nuggets set foot on the court in Dallas and came away with a 107-106 victory.

The Lakers and Nuggets own the top two winning percentages in the Western Conference.

Things have gone slightly better of late for Dallas against the opposite conference, with the Mavericks winning two of their past three games against teams from the East. Next up is a duel with a Sixers team that will be missing big man Joel Embiid after he underwent surgery on his left ring finger this week.

Yet it's not as if playing a team void of a top player is always beneficial. The Lakers were without Anthony Davis because of a bruise near his tailbone, and they still pushed the Mavericks around on their own court Friday.

The Mavericks trailed by 18 points after one quarter and were down 79-58 at halftime. They were able to make the aesthetics somewhat better in the second half, but it's not as if it will give them a ton of momentum heading into Saturday's game.

Luka Doncic finished with 25 points against the Lakers, but there was only so much he could do. The Mavericks were playing without Kristaps Porzingis (sore right knee) for a sixth consecutive game. Porzingis received a platelet-rich plasma injection in the knee Friday in an effort to assist healing, but he will not play Saturday.

"When things are going bad, you're never that far from them going good, and vice versa," Mavericks coach Rick Carlisle said. "It's all very tenuous. But we got to stick together. When any of this stuff happens, it's going to be my responsibility. I'm going to take the pressure off these guys. It is a young team, but we're not making excuses about it. We just got to get better."

The Sixers have every reason to believe they can win without Embiid, since they delivered a 109-98 victory against the Boston Celtics without him on Thursday. Josh Richardson scored a team-best 29 points while Ben Simmons scored 19 points and grabbed nine rebounds.

Simmons, an All-Star point guard last season, even tried his hand at center on Thursday and held up well.

"I've always been curious of what that could look like," Sixers coach Brett Brown told reporters afterward about Simmons' move to center. "I thought he was good. I don't know what the numbers bear out, but it's something we tried. I have wanted to try Ben at 5, we did, and I suspect we'll see it again."

The Mavericks will conclude a season-high, six-game homestand on Saturday, while the Sixers will open a quick two-game trip that concludes at Indiana on Monday.