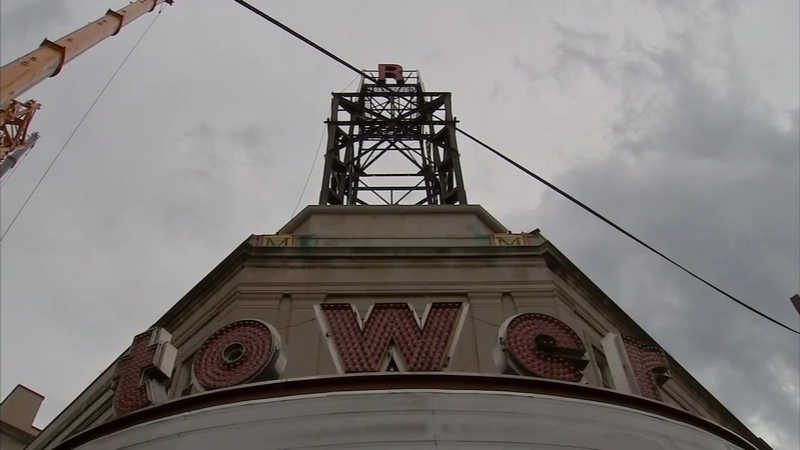 UPPER DARBY, Pennsylvania (WPVI) -- Work is done for the day in Upper Darby. Crews are expected back Wednesday to finish the job of dismantling the landmark tower that has topped the Tower Theater for 92 years. The theater is located at 69th and Ludlow streets.

Using large cranes workers with the Martino Signs Company of Yeadon began the work Tuesday morning. They carefully dismantled parts of the 100-foot-high tower which held large red letters that spelled out "Tower" in a vertical row.

"I saw several concerts here," said Mark Suero of Drexel Hill. "It's disturbing that they are taking the tower down."

The sign company had originally been hired to install new lights in those letters. The workers however quickly discovered the tower's structural steel had seriously deteriorated. Engineers informed the company and the theater's owner that the tower was unsafe and could possibly collapse onto busy 69th Street. A repair plan was considered but in the end it was decided that dismantling the structure was the safest option.

"We got engineers up here and they said it has to come down ASAP," said Dave Martino of Martino Sign Company. "It had to come down."

The 100-foot-tall tower had been part of the Theater since it opened as a movie palace in 1927.

In the 1970s, the theater became a popular live concert venue. It has hosted Bruce Springsteen, James Taylor, Stevie Wonder and many more entertainers. It has about 3,000 seats.