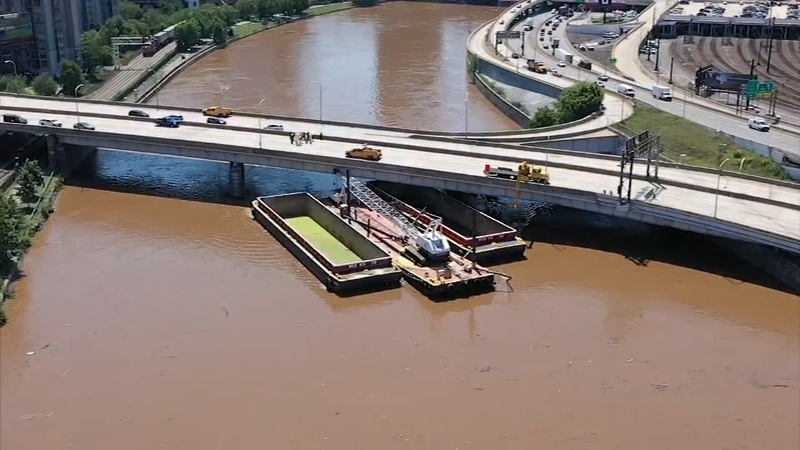 PHILADELPHIA (WPVI) -- Interstate 676 in Philadelphia is shut down after a barge broke loose on the flooded Schuylkill River during Tropical Storm Isaias on Tuesday.

The barge broke loose around 5 p.m. and hit the Vine Street Expressway bridge over the river.

Bridge inspectors were on the scene to look for any damage.

During a press conference on Wednesday afternoon, a PennDOT Representative said there was some good news: only minor structural issues were discovered, and there was no damage that would compromise the structural integrity of the bridge.

What is that ? People keep asking what is that massive thing in The Schuylkill stuck against the 676 Bridge. PENNDOT engineers will determine today if a loose barge caused any damage to the bridge until then major traffic impacts ... @6abc pic.twitter.com/vDMUjrk5gg

PennDOT earlier said it was possible part of 676 could reopen Wednesday, but later said all lanes will remain closed until at least Thursday afternoon.

That's when the river level is expected to recede to the point the barge can be moved.

The barge was being used by the Army Corps of Engineers to dredge portions of the Schuylkill River above the Fairmount Dam.

US Army Corps of Engineers says barges were being used as part of project to dredge portions of the Schuylkill above the Fairmount Dam. When water drops, a tugboat will likely be used to free barges. pic.twitter.com/x591JjXmnr

In the meantime, PennDOT recommends drivers use the following detours:

-Motorists heading to New Jersey: Take I-76 East to the Walt Whitman Bridge;

-I-76 motorists heading to Center City: Exit at the Spring Garden Street or South Street interchanges;

-I-95 South motorists: Travel to Exit 19 and follow Front Street to Pattison Avenue to Broad Street to the I-76 West entrance ramp; and