Protestors are traveling from California, Pennsylvania and elsewhere to voice concerns about a myriad of issues.
ABCNews
By Oren Oppenheim, Matt Seyler, and Beatrice Peterson 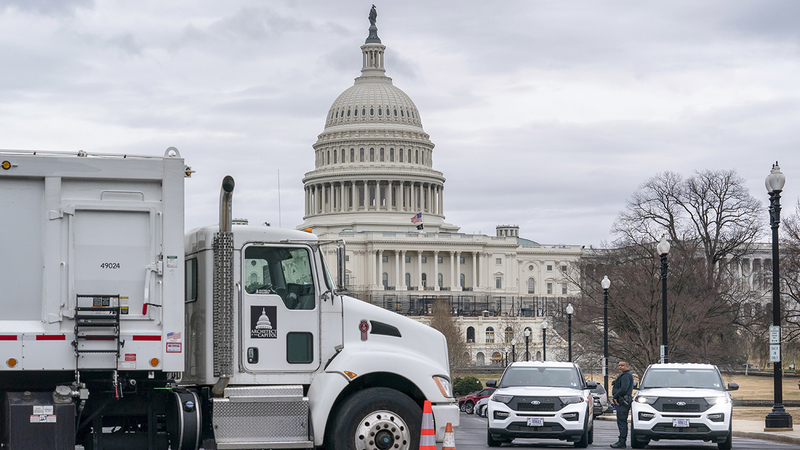 National Guard readies ahead of planned trucker protest in DC

Those convoys plan to head to the Washington area to potentially disrupt traffic beginning Wednesday.

About 400 members of the D.C. National Guard and 300 members from outside of the district will support traffic control. None will carry firearms "or take part in law enforcement or domestic-surveillance activities," according to the National Guard Bureau.

Trucker convoy protests are expected to continue through early March, before and after Biden's first State of the Union address on March 1.

Canadian police moved in to remove protesters Saturday at bridge border crossing that has disrupted Canada US trade.

Protestors are traveling from California, Pennsylvania and elsewhere to voice concerns about a myriad of issues, from COVID-19 vaccine mandates to domestic oil production. The convoys are coming just weeks after similar protests in Canada's capital, Ottawa, and on the U.S.-Canada border paralyzed traffic and trade.

Officers from Washington's Metropolitan Police Department will increase patrols on Feb. 22 through March 5, shortly after the State of the Union, according to an internal MPD message obtained by ABC News. The department will also have two rapid response teams ready.

On Tuesday, district officials sent a push alert warning residents of potential disruptions to traffic this week. Sources told ABC News that fencing outside of the Capitol is expected to be raised on Wednesday.

Bob Bolus Towers & Truckers for America is one of three convoys expected to begin their journey to Washington this week. All groups have said they will be coming to the D.C. area, but they stopped short of saying they would be in downtown Washington, alluding to plans to disrupt traffic in Maryland and Virginia.

Convoy leader Bob Bolus, a vocal supporter of former President Donald Trump, told ABC News affiliate WJLA on Tuesday that he plans to travel from Scranton, Pennsylvania, to protest in Virginia and Maryland. He told WJLA he planned to stay out of Washington, but, unlike at the protests in Ottawa, he doesn't plan to instruct his convoy to camp out on the highway. Instead, he plans to cause gridlock on Interstate 495.

Convoy leader Bob Bolus, a vocal supporter of former President Donald Trump, told ABC News affiliate WJLA on Tuesday that he plans to travel from Scranton, Pennsylvania, to protest in Virginia and Maryland.

"We're not camping on the Beltway. We're gonna have our voices heard and let them understand this is only the tip of the iceberg," Bolus told WJLA.

He also said that if he doesn't have enough support, he will scrap his plans to protest at the last minute.

Another group, The People's Convoy, is set depart from Adelanto, California, on Wednesday for an 11-day journey to the beltway area. That group is calling for the Biden administration to end the COVID-19 National Emergency and to lift all mask and vaccine mandates.

The People's Convoy, like Bolus, said in a statement that it "will abide by agreements with local authorities, and terminate in the vicinity of the DC area, but will NOT be going into DC proper."

"With the advent of the vaccine and workable therapeutic agents, along with the hard work of so many sectors that contributed to declining COVID-19 cases and severity of illness, it is now time to re-open the country," the group wrote in the statement.

The American Truckers Freedom Convoy, a group funded by "The Great American Patriot Party" political action committee, said it will travel beginning March 1. Its convoys will arrive in the Washington area from California, Georgia and Ohio. They are currently fundraising for their upcoming effort.

Traffic in the city could be disrupted by the convoys, D.C. Police Chief Robert Contee said on Friday.

"I think we have to be realistic about, you know, what we could potentially see there will be disruptions to traffic ... And I think we need to be very candid with the public about what some of the expectations based upon what we've seen in Ottawa, what some of those things could be that we might see here in the District," Contee said.