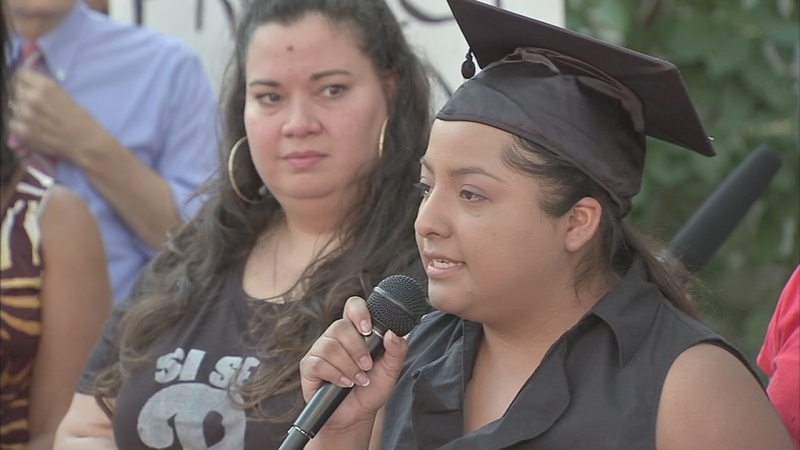 It provided nearly 800,000 young immigrants a reprieve from deportation and the ability to work legally in the U.S.

"Today's decision is a tragedy. Ending the DACA program is not only cruel, it is detrimental to our health as a nation and inherently un-American. Those who have benefitted from the DACA program came here with their parents searching for a better life and more opportunities. They escaped violence, natural disasters and hunger. Today, many are thriving as students and young professionals, and contributing to the vibrant fabric of our nation. In Pennsylvania, DACA has allowed nearly 5,900 young people to come forward, pass background checks, and live and work legally in the country. Ending DACA would cost Pennsylvania nearly $357.1 million in annual GDP losses. To our Philadelphian DACA recipients - we respect you, we love you, and don't let anyone ever tell you you're not an American."

Earlier in the day, some beneficiaries of DACA, known as "Dreamers," spoke out at a rally on Chestnut Street in the city's Old City section.

Anel Medina, for example, came to the US from Mexico when she was five years old. Today, she is a registered nurse working at a local hospital.

She says despite her legal status, she is an American. She is deeply concerned that she may now be forced to leave what she sees as her country.

The same goes for Olivia Vazquez, who came to the U.S. in 2004. She says it's painful when members of the migrant community are treated poorly, when so many simply want to work hard and take part in the American Dream.

"Our communities have been under attack for a very long time, but it's important to remember that if we united we can fight back," she said.

Among the speakers during the really was Councilperson Maria Quinones Sanchez, who says repealing DACA will do more harm than good.

"This is not about thoughtful legislation or pathways to resolve what everybody understands is an immigration challenge we've had in the country," she said.

We asked Villanova Law Professor Michele Pistone for a legal perspective on the Trump administration's assertion that DACA conflicts with existing immigration law.

She says the irony is that when this issue did go before the Supreme Court, it occurred before the appointment of Neil Gorsuch.

That rally turned into a march to the Immigration and Customs Enforcement building at 8th and Arch.

The Trump administration is giving Congress six months to come up with a legislative fix before the government stops renewing permits for people already covered by the program.