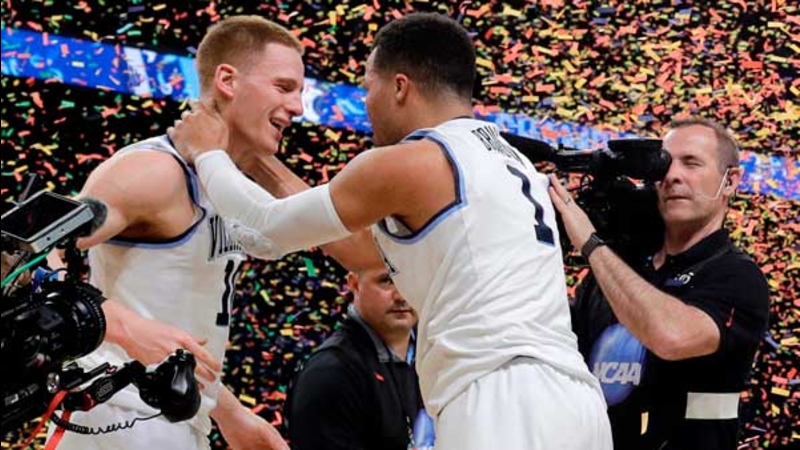 Donte DiVincenzo breaks out in starring role vs Michigan

SAN ANTONIO -- Donte DiVincenzo's biggest contribution to Villanova's 2016 national championship was made at practice, often playing the role of the opponents' best player.

The Michael Jordan of Delaware, as his teammates call him, has come a long way from a redshirt freshman season that was frustrating at times, but probably helped set the stage for a bigger role toward Villanova's next national championship. 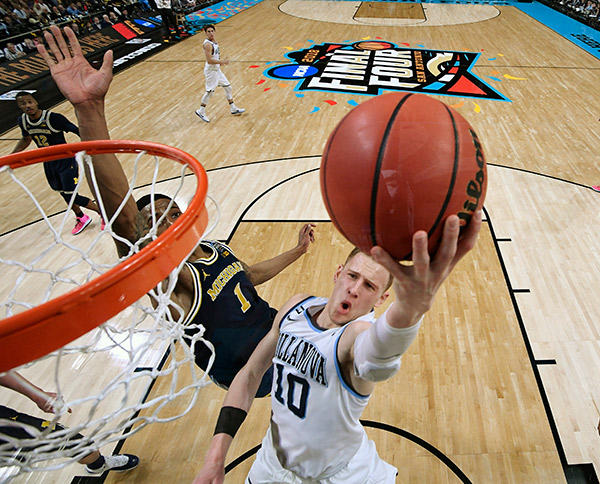 Villanova's Donte DiVincenzo (10) goes up for a shot during the championship game of the NCAA college basketball tournament, Monday, April 2, 2018, in San Antonio.

How tall is Donte DiVincenzo?

Where is Donte DiVincenzo from?

What year is Donte DiVincenzo?

How old is Donte DiVincenzo?

Where did Donte DiVincenzo go to high school?


DiVincenzo was the breakout star of the NCAA Tournament title game Monday night, scoring a career-high 31 points against Michigan in a 79-62 victory that gave the Wildcats two titles in three seasons.

"Donte's willingness to come off the bench this year and be the sixth man really separated us from other teams. He was a sixth starter," Villanova coach Jay Wright said. "He had a clear head and he did whatever we needed all year. Tonight we needed 31. I didn't think we'd need him to do that but he has done it, so we'll take it."

When Villanova was struggling with its shots early in the first half, DiVincenzo provided a wakeup call for the Wildcats. He scored 16 and was the main reason why the Wildcats were able to erase an early seven-point deficit against a Michigan defense that was one of the stingiest in the nation.

In the second half, when Michigan tried to make a move, DiVincenzo put down the uprising with 11 straight points and a wink toward the sideline at his buddy and former Wildcats star Josh Hart, who is in his rookie season with the Los Angeles Clippers.

"Me and Josh have a unique relationship," DiVincenzo said as he held court with reporters in the locker room long after most of the players were done doing interviews. "We compete against each other so hard. We got into a lot. I think we're so similar, that's the reason why. I knew he was proud at that moment."

"Honestly, when I got into the game, all I was trying to do was play hard," DiVincenzo said. "I just wanted to help my team offensively."

DiVincenzo was just a cheerleader and practice squad player for Villanova during that championship run in the 2015-16 season. The sophomore from Newark, Delaware, broke his foot early in his freshman season and was limited to eight games and a medical redshirt, though he probably could have played later.

"That year versus this year it was tough not being out there competing with these guys," DiVincenzo said.

He was healthy enough to practice and played the role of Oklahoma All-American Buddy Hield as the Wildcats prepared to play the Sooners in the 2016 national semifinals.

"Here's a kid that went to Villanova and redshirted a year," Michigan coach John Beilein said. "You say, 'redshirt,' to a kid right now, it's like, 'Hey, how would you like to have the bubonic plague?' And he redshirts, and there he is right now, scoring 30-some points in the national championship game. There's a process that young men have to go through in their maturation in this game, and he's done that, and what a special player."

DiVincenzo was on the bench when Kris Jenkins hit the winner at the buzzer to give Villanova the championship against North Carolina.

In this title gamer, on a team with AP player of the year Jalen Brunson and potential NBA lottery pick Mikal Bridges, DiVincenzo was the go-to guy.

The Big Ragu, another nickname, finished 10 for 15 from the field, with five rebounds, three assists and two blocked shots.

DiVincenzo said adjusting to coming off the bench early this season was not easy at first. Now?

"I wouldn't want it any other way, honestly," said DiVincenzo, who came in averaging 13 points per game. "If I was starting this year and we made a change in the midway through the year or something like that, it would have messed up what we had. And those guys know what I was bringing off the bench and I knew what those guys started with. So I didn't want to mess that up."

What DiVincenzo brought Monday night was the highest scoring game for any single player against Michigan this season and the most points ever in an NCAA championship game by a non-starter.

"He's a killer," Brunson said. "He carried us tonight."