'100-year flood' hits part of the Philly region | What does that mean? 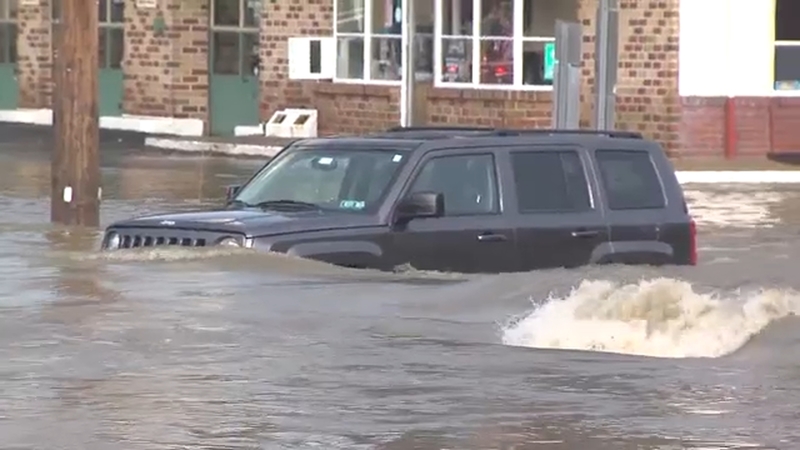 Then at about 4 p.m., another piece of energy ignited that severe weather, causing the rain to intensify even more.

The pattern sat across that portion of the region and unleashed a torrent of rain until about 7 p.m.

It finally dropped south of the area, but by then the damage was done.

Four to 10 inches fell across a widespread area of the region.

And a large area between Croydon, Bristol and Florence, received eight to 10 inches of rain in those few hours.

UPDATED RAINFALL TOTALS
We are now seeing radar estimates of up to 8" near Bristol where a flash flood emergency remains in effect and travel is discouraged. We have over 2 dozen reports of flash flooding in the Lower Bucks/NW Burlington County area. pic.twitter.com/BHg4h6w8O0

Some of the rainfall estimates as of Monday night:

According to the National Weather Service, the term "100-year flood" is misleading. It is not a flood that will occur once every 100 years. Rather, it means a flood of this intensity has a 1-percent chance of being equaled or exceeded in any given year. Thus, the 100-year flood could occur more than once in a relatively short period of time.

A significant flash flood occurred Monday afternoon and evening near the Delaware River in Bucks and Burlington Counties. The areas greatest impacted by this event received 6"-10" of rain in around 3-4 hours. This is estimated to be a 100 year flood. #PAwx #NJwx pic.twitter.com/BZZ9F1rOPk

That being said, with climate change, events like this are happening more frequently. There is more moisture in the warmer atmosphere and you can get storms like this unleashing a lot of rain.

The NWS also says the 100-year flood, which is the standard used by most Federal and state agencies, is used by the National Flood Insurance Program (NFIP) as the standard for floodplain management and to determine the need for flood insurance.