What we know about combined pulmonary fibrosis, emphysema 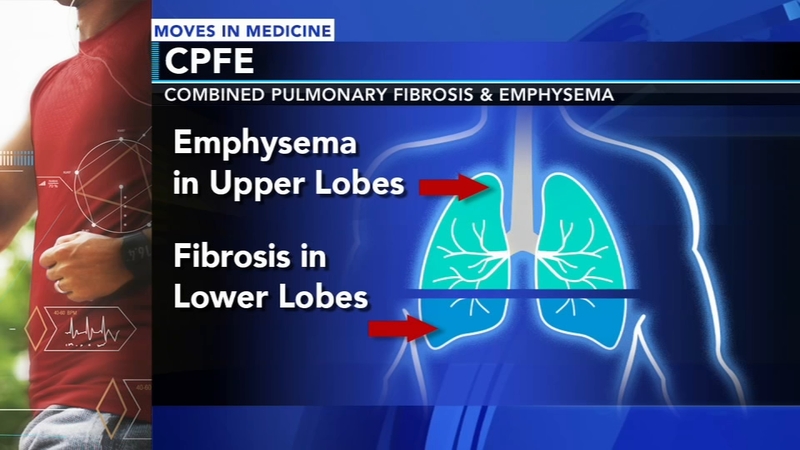 What we know about combined pulmonary fibrosis and emphysema

PHILADELPHIA (WPVI) -- There's another disease to add to the list of smoking-related ailments. But for doctors, they are still learning about CPFE or Combined Pulmonary Fibrosis and Emphysema.

For years, emphysema made Edward Hammond's breathing worse and worse. Hammond, who once traveled the world for his job, could barely get around, even with oxygen.

"If I went to the supermarket, I had to hold onto a cart to walk down the aisles, take several steps and I'd have to stop," he said. "I would sit on the sofa at home, watch TV."

Out of options, Hammond's lung specialist sent him to Temple Health, where he was diagnosed with CPFE.

Dr. Mulhall said emphysema hits the upper lobes first, then pulmonary fibrosis, scarring begins in the lower lobes. The combination was first formally described in 2005, so research is still in the early stages.

"There's some thought that maybe long-term tobacco exposure, smoke exposure, results in emphysema, and then the healing process of the lung has been abnormal in those patients, leading to scarring," he said.

Patients like Hammond often develop pulmonary hypertension, high blood pressure in the lungs. And there's a higher risk of lung cancer. Dr. Mulhall said drugs aimed at each condition are the usual course. But often, many patients need a lung transplant. Hammond says his transplant two and a half years ago was life-changing.

"I can go in the pool with my granddaughter. I was able to walk my daughter down the aisle when she got married," he said.

"This is one of the few times that a lung doctor can say we've cured something," said Dr. Mulhall.