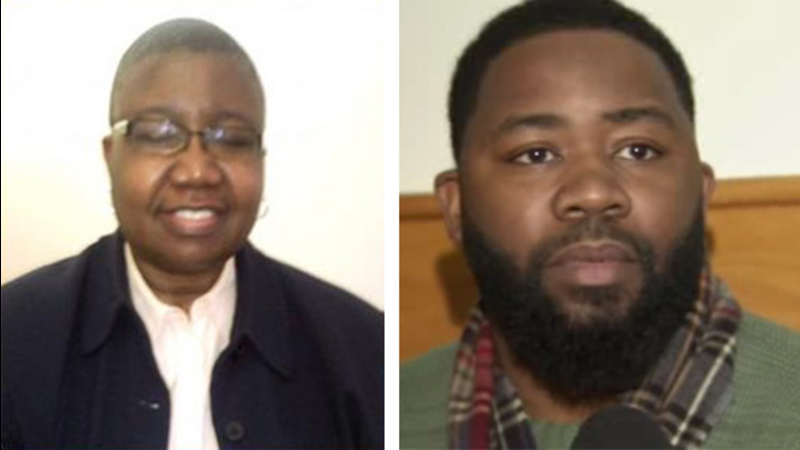 NORTH PHILADELPHIA (WPVI) -- Police have identified the man charged with murdering his co-worker as she waited for a bus in North Philadelphia.

36-year-old Randolph Sanders has been arrested and charged with the murder of 56-year-old Kim Jones.

Police say Sanders was brought in to speak with homicide detectives on Saturday, during which time he allegedly confessed to the murder.

According to police, Sanders killed Jones because she was going to report him for the alleged theft of funds from the nonprofit where they worked.

Deputy Commissioner Richard Ross said at a press conference Monday, "This is the type of investigation that leaves you angry and confounded."

The shooting happened around 9:30 a.m. Tuesday, January 13th at 12th and Jefferson Streets in North Philadelphia.

Police say Jones was waiting for the Route 23 SEPTA bus. She had headphones in her ears and was listening to gospel music at the time.

That's when, according to investigators, Sanders, dressed in a disguise, quietly walked up from behind and shot her in the back of the head.

Action News spoke with Sanders during the initial coverage of Jones' murder.

"A psychopath can do something crazy like that - kill a human being and not think anything of it," said Jean-Paul, Jorden, victim's son.

The victim and Sanders ran a program for Turning Points for Children on South 15th Street, which has a contract with the city's Department of Human Services.

"That was the main goal of her life - just to give and not take. And the fact that this guy's main goal was to take," said Jorden.

Captain Clark says that Jones hired Sanders two years ago as an assistant director for the non profit organization.

However, Jones allegedly accused Sanders of mismanaging funds and possibly stealing thousands of dollars from the nonprofit.

Police say the preliminary investigation into the theft estimates the total amount stolen at $40,000.

On the morning of her murder, police say Jones was on her way to DHS to report Sanders.

On Sunday, detectives were back on the scene with a metal detector looking for evidence.

However, Clark says surveillance video of the shooter led them to a vehicle, which led them to Sanders.

Detectives' big break in the case was when they realized Sanders drove the same type of vehicle.

Police took Sanders in to custody at his Northeast Philadelphia home on Ryerson Road, where they searched the residence and also found three guns.

Jones' son continues to ask why?

As for the alleged theft of funds from the nonprofit, those accusations are still under investigation.

We learned earlier today that Turning Points for Children employee, Randolph Sanders, confessed to killing Kim Jones. Randolph was the Assistant Director of the FAST program, which provides parent education and family support services. Mr. Sanders has been an employee of the organization for more than two years. We are both shocked and saddened by this news. Right now our primary concern is the well-being of the entire staff.

Through this entire investigation we worked closely with the Philadelphia Police Department and are relieved that they have found her killer, but devastated by the discovery.

Turning Points for Children is working to understand why this tragedy occurred, and fully cooperating with authorities. Additionally, we will begin conducting our own internal investigation.

Since Kim's senseless and tragic death, we have provided grief counselors to all our employees. We will continue to make those services available in light of today's news.