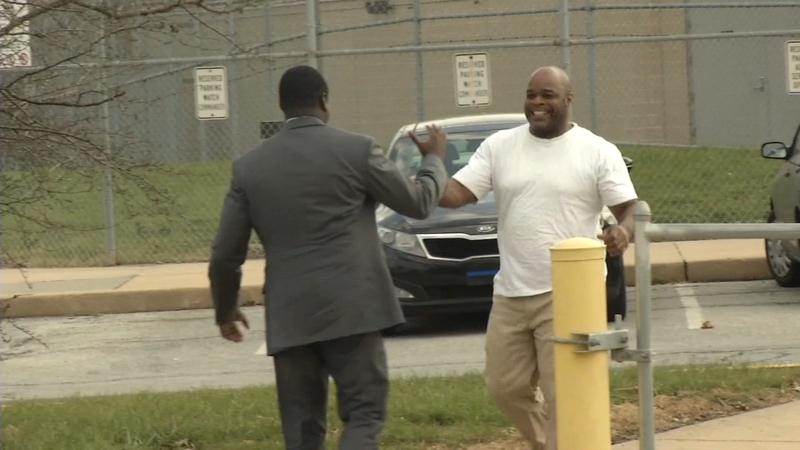 A man convicted of rape in 1980 was released from a Delaware prison Thursday.

Nearly 40 years later, prosecutors dropped the case after federal officials concluded earlier this year that FBI testimony about evidence in the case was invalid.

Elmer Daniels was 18 when he first went to prison for rape and spent decades arguing he was innocent.

Thursday, his fight for justice was answered.

Only Action News was there as Daniels was released as a free man.

Only our cameras were there as Elmer Daniels got his first taste of freedom.

Daniels was convicted in 1980 of raping a 15-year-old girl in Wilmington after an FBI agent testified at the trial.

Hair evidence linked the then 18-year-old to the assault.

Daniels was sentenced to life in prison but never stopped trying to prove his innocence.

That turning point came in 2015 when he met attorney Emeka Igwe while out on parole.

"To find someone that believed in me and having me trust them. It was very hard for me to trust, going through what I was going through at such a young age. For the most part, it felt like nobody cared, but he did," said Daniels.

"He told me his story, I believed in his story. We met a local church clinic, and we started on working on his case," said Igwe.

With Daniels parole unjustly revoked according to his attorney, he returned to prison, and Igwe and his lead investigator worked on his case for two and a half years.

But it wasn't until this year that Daniels' conviction was called into question after federal officials concluded the FBI testimony about hair evidence in the case was invalid.

"We have been able to prove beyond a shadow of a doubt that Mr. Daniels is an innocent man," said Igwe.

The Delaware Attorney General filed a motion to dismiss Daniels' indictment, but noted in the motion, "They were unable to declare him innocent."

As for Daniel's immediate plans? He said, "Sit down with my advocates, have a conversation and have something to eat."

Prosecutors also noted had Daniels been sentenced under today's guidelines he would have already served the minimum sentence for 15 years.

Daniels release comes one day after his 57th birthday.