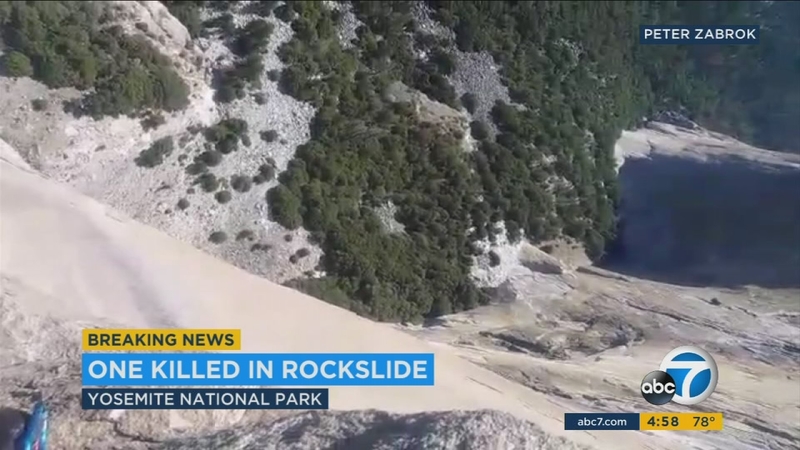 YOSEMITE NATIONAL PARK (WPVI) -- At least one person was killed and one injured when a rockslide was triggered at Yosemite National Park's popular El Capitan rock formation, officials said.

A large rock fell near the East Buttress climbing route on El Capitan at around 1:55 p.m., a park spokesperson said.

At least 30 climbers were on the wall at the time, but it was not clear if the victims were climbers or tourists, ranger Scott Gediman said.

A search was launched for climbers who may have been caught in the rockslide.

El Capitan is one of the world's largest granite monoliths, towering 4,000 feet above Yosemite Valley.

Mountaineers from around the world travel to the park in the Sierra Nevada to scale El Capitan's sheer face. Fall is one of the peak seasons because the days are long and the weather is warm.

Rock falls are common in Yosemite but seldom fatal.

Climber Kevin Jorgeson said he and climbing partner Tommy Caldwell witnessed a massive rock fall in the same area while they prepared for a trek that made them the first people to free-climb the Dawn Wall on El Capitan in 2015.

First they heard a rumble and then they saw a white cloud of dust.

"Yosemite is just a really active, wild place. It's always changing," Jorgeson said. "It doesn't make it any less tragic when someone gets in the way of that."

Park officials are investigating how the rockslide started.

The park itself remains open and other visitor services are not affected.