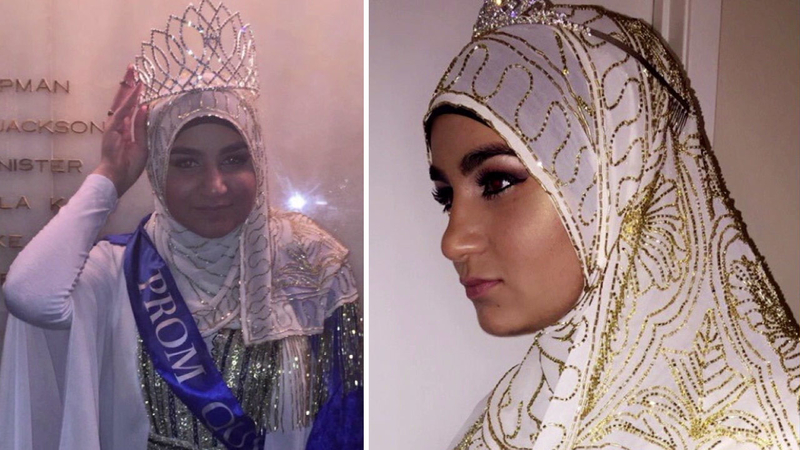 "You know it's not typical you would see every day for a girl with a hijab to win prom queen," Zarifeh said.

The Fontana, California teenager is a devout Muslim who wears a hijab as a sign of her faith. In April, she and five other girls were chosen by their peers to represent the prom court.

The announcement made during second period set off a frenzy in Zarifeh's social circle.

"I was like Zarifeh we got to campaign. It's time to start campaigning," Savannah Smith, Zarifeh's friend said.

In a show of solidarity, Zarifeh's friends campaigned for her while wearing hijabs and bright neon green shirts.

With the site of the San Bernardino terrorist attacks just 15 miles from the school, students set out to fight the negative response to the Muslim community.

"Especially with San Bernardino being so close, just to see we are all not like that," Zarifeh's friend Rosamaria Lopez said. "We don't discriminate against anybody, any religion, we accept each other for who we are."

But as the day of prom drew near, Zarifeh ran into a problem. She needed to convince her mother to let her go to the dance.

"Me and my friends are all going single, we're just going as a group of girls, like a group date together and eventually she said 'yes,'" Zarifeh explained.

Zarifeh wore a traditional dress with a beaded hijab. Even if she didn't win, she said it would be a special night for her.

"It was my first dance, my first party," Zarifeh said.

Toward the end of the evening on April 9, her classmates made it clear: they accepted Zarifeh for who she was.

Zarifeh celebrated another milestone on Tuesday: her 18th birthday.