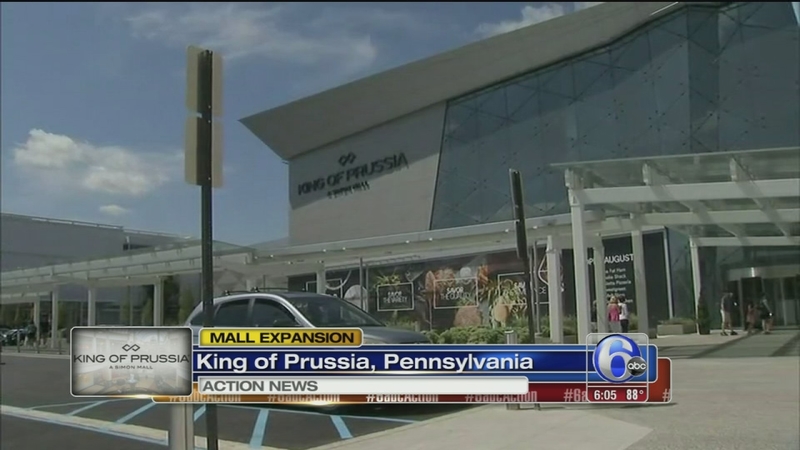 KING OF PRUSSIA, Pa. (WPVI) -- The biggest shopping mall in our area - one of the biggest in the world - got even bigger Thursday.

Years of expansion work at the King of Prussia Mall is finally complete.

And now, for the first time, the mall's two sections, the Plaza and the Court, are permanently connected.

Doors opened to the public at 10 a.m. Thursday.

This expansion makes the mall four times its original size, boasting 40 new retailers with an emphasis on luxury.

Brands like Jimmy Choo and Carolina Herrera join the list of well-known stores already represented at the mall.

And there's a new, upscale food court with a wide range in culinary trends.

"The design of the connection is fabulous, really flows people through," said Dave Forney.

Another thing that stands out to locals is the absence of the outdoor walkway that used to separate the mall's Plaza and Court sections.

Instead of a ribbon-cutting organizers Thursday symbolized the opening of the new connection by bringing two large ribbons together.

The $250 million project started 2 and a half years ago.

"It really sends a signal to any other company looking to invest," Pennsylvania congressman Brenda Boyle told Action News. "It says to thousands of people working here, 'You have a secure future.'"