2 dead after being pulled from manhole in Delaware County 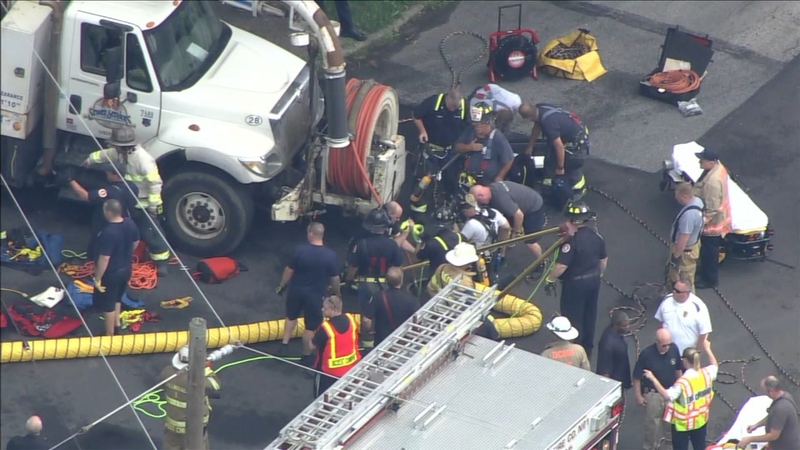 2 dead after being pulled from manhole in Delaware County

ALDAN, Pa. (WPVI) -- Authorities are investigating the deaths of two men discovered unconscious at the bottom of a thirty-foot manhole on Thursday in Aldan, Pennsylvania.

Both men, in their 20s, were conducting a dye test on the sewer system on West Rively Avenue between Sycamore and Magnolia.

They were employees of A to U Services out of Glenolden.

During the dye test, another crew at the end of the block lost contact with their co-workers. They soon discovered both men unconscious in the hole and called 911.

Fire rescue crews pulled each man up individually, but they were pronounced dead at the scene.

2 dead after being pulled from manhole in Delaware County.

"It's a very heartbreaking situation we have going on here," said Aldan Mayor Carmen Maniaci.

Authorities have identified the men as Daniel Cleaver and Matthew DiSands, both of Prospect Park.

Authorities say both men and their families are well known to them because of their strong ties to the community.

"One of the victims, his father is a police officer not here but in another Delaware County community. The other victim we all know," said Aldan Police Chief Kenneth Coppola.

Daniel Cleaver— one of two men discovered unconscious at the bottom of a 30 foot manhole in Delaware Co. His family tells @6abc: “We are mourning the tragic loss of Danny who past away far too soon. He was a loving son,brother & father; and deeply in love with his fiancé.“ pic.twitter.com/IMcVI9e26h

"We are mourning the tragic loss of Danny who passed away far too soon. Danny was a loving son, brother, friend, and father of his 8-year-old son. Danny was deeply in love with his fiancé and due to be married in October. Danny loved sports and was a dedicated Phillies and Eagles fan. Danny will be forever missed by his entire family, friends, coworkers and anyone who ever knew him," said Daniel's family in a statement to Action News.