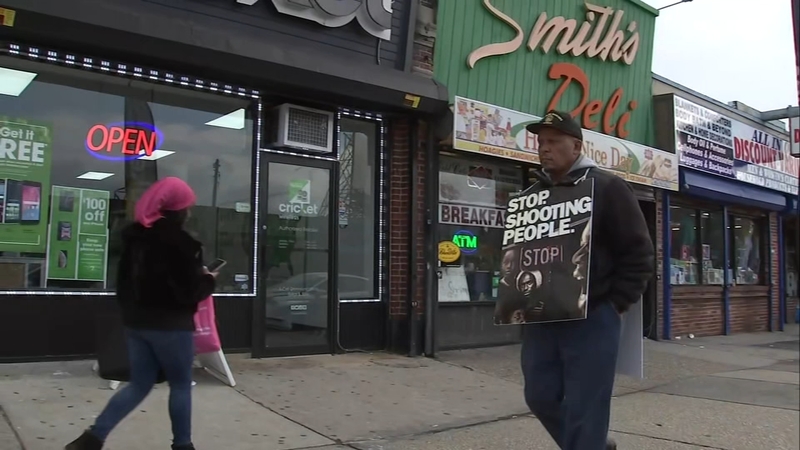 PHILADELPHIA (WPVI) -- The city of Philadelphia ended 2019 with 356 homicides, the most in the city in more than a decade.

In all, three people were killed in separate shootings on New Year's Eve.

The day ended with gunfire in the Summerdale section of Philadelphia that left a woman dead. The victim was shot to death inside a home in the 5600 block of Frontenac Street around 10:17 p.m.

A man was also found with a self-inflicted gunshot wound. He later died at the hospital.

Deadly double shooting in Summerdale: as seen on Action News Mornings on January 1, 2020.

The first homicide of New Year's Eve happened shortly before 11 a.m. in the 3500 block of Germantown Avenue near Tioga Street in North Philadelphia.

That's where a 47-year-old man was fatally shot. No suspects have been identified in this case.

Then, around 2 p.m., a man was shot in the 4000 block of North 7th Street. He was rushed to the hospital in critical condition but died a short time later.

There was no word on any suspects or arrests.
EMBED More News Videos

The total number of homicides in Philadelphia for 2019 is more than New York City and a significant jump from this decade's low of 245 notched five years ago.

"It's a struggle that we're willing to take on and and at end of the day, we have to succeed," said city council president Darrell Clarke.

"We do have to talk about the fact that some individuals have exhibited behavior that they should no longer be on the streets on the city of Philadelphia. We're going to have to come to grips with that conversation," Clarke said.

Clarke also said they're prepared to pump more money into the police department as a new commissioner gets ready to step in.

"We have a 6,500 member police force. They can't do it alone. They must have a relationship with the community to take back our neighborhoods," Clarke said.

Jamal Johnson, an activist and Marine veteran is holding an awareness walk down N. Broad Street between Olney and Snyder encouraging the community to participate.

Mayor Jim Kenney named Portland, Oregon Chief Danielle Outlaw to the job of police commissioner on Monday, four months after the last commissioner resigned abruptly in the wake of a sexual harassment lawsuit.

Outlaw addressed a number of topics during a press conference Monday, including gun violence.

"It will be a privilege to serve as Philadelphia Police Commissioner and to serve all who live and work in this great city. I will work relentlessly to reduce crime in Philadelphia - particularly the insidious gun violence that plagues too many communities," Outlaw said. "And I will do so in a way that ensures all people are treated equitably regardless of their gender identity, race, ethnicity, or sexual orientation. I am convinced there can be humanity in authority; they are not mutually exclusive. That was true in Oakland and in Portland, and I know it is true here in Philadelphia."