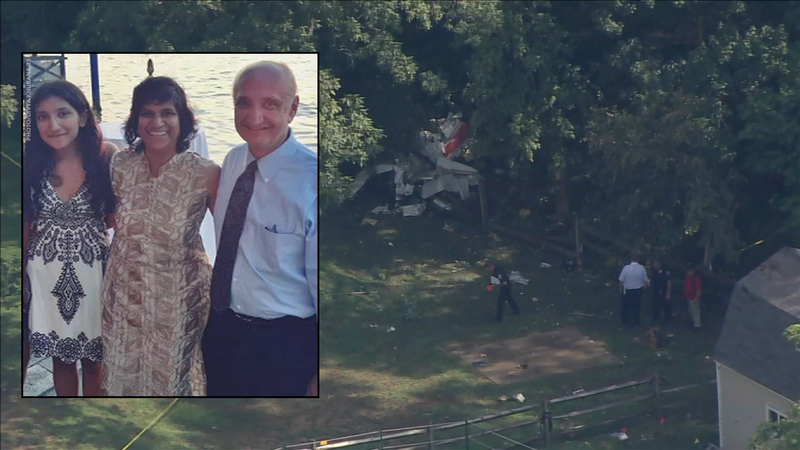 UPPER MORELAND TOWNSHIP, Pennsylvania (WPVI) -- A couple, who worked as physicians at Temple and Drexel universities, and their teenage daughter were killed in a plane crash in Montgomery County, authorities confirm. 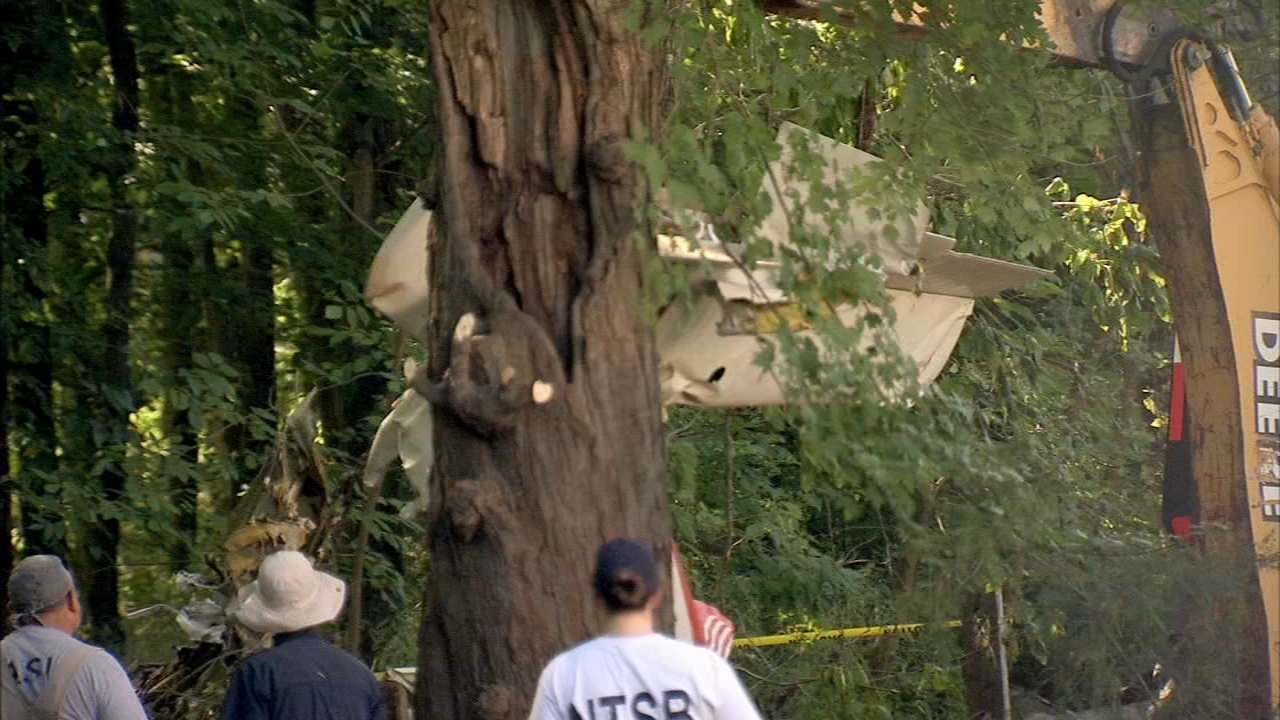 NTSB returns to site where parents, teen died in plane crash
The National Transportation Safety Board returned to the site of the fatal plane crash in Upper Moreland Township.

Police said a call to 911 was made from a resident on Minnie Lane in Upper Moreland Township around 6:20 a.m.

Chopper 6 was over the scene of a small plane crash in Upper Moreland Township, Montgomery County on August 8, 2019.

A single-engine Beechcraft Bonanza propeller plane with the tail number N4082S had crashed in the rear of the property, police said.

Dr. Jasvir "Jesse" Khurana, 60, was piloting the plane. His wife Dr. Divya Khurana, 54, and their daughter, Kiran Khurana, 19 were also on board.

All three were killed in the plane crash. No one on the ground was injured.

The family leaves behind one daughter.

Jasvir was a pathologist at Temple University.

"Dr. Khurana has been a valued faculty member in the Department of Pathology at the Lewis Katz School of Medicine at Temple University since 2002. Our thoughts are with his family and loved ones," said a Temple spokesperson.
EMBED More News Videos

The Action Cam was on the scene after a small plane crashed in Upper Moreland Township, Pa. on August 8, 2019.

Drexel University confirmed that Divya was a professor of pediatrics in the Drexel College of Medicine where she specialized in pediatrics, sleep medicine and pediatric neurology.

The Khurana's plane took off from Northeast Philadelphia Airport. Based on the flight plan, investigators believe the plane was headed for Ohio State University.

FATAL PLANE CRASH: 911 call came in at around 6:20am. 4200 block of Thistlewood in Hatboro. No one on the ground was hurt. All people on board died. @6abc pic.twitter.com/Kf3r7uQEtF

There has been no word on a possible cause of the crash. Investigators from the NTSB arrived on the scene Thursday afternoon.

"We're looking at the big items: so what we like to say is, the airplane, the pilot, and also the environmental conditions," said NTSB Investigator Adam Gerhardt.

According to Gerhardt, the flight lasted three minutes leading up to the crash.

Gerhardt said there was no distress call and the plane was not equipped with a black box.

"We don't have any reports right now that there was any radio call from the air," said Gerhardt.

While investigators have yet to determine the quality and the quantity of fuel that was in the plane, they said there was nothing to suggest there had been an explosion or fire either in the air or at the crash scene.

"This is a very small debris path," said Gerhardt.

There was no damage to any nearby homes, police said, though an outbuilding to the rear of a Minnie Lane property was damaged.

Items left hanging in tree after single engine plane crash on Thistlewood/Minnie in Upper Moreland Township. All on board died. NTSB Investigators are on the way. @6abc pic.twitter.com/VC4ZUwQaw9

A steady flow of mourners arrived at the family home hugging each other, devastated by the loss of their friends.

Friends said one of Jasvir's greatest accomplishments was climbing Mount Everest as part of a scientific project.

"They're very neighborly, and it's tragic," added Stander.

"He was very kind, he seemed like a very gentle kind man and his father is a sweetheart, the whole neighborhood knows him," said neighbor Teresa Milestone.