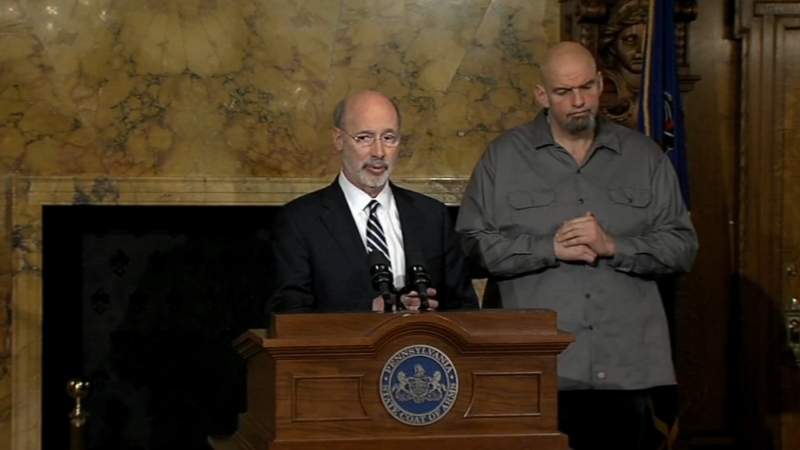 HARRISBURG, Pa. -- The Wolf administration wants to open a "conversation" about legalizing marijuana in Pennsylvania and announced Thursday that the lieutenant governor will hold a series of town hall-style sessions on the subject.

Lt. Gov. John Fetterman, himself an advocate of legalizing recreational use of the drug, said he will hold a listening session in each of Pennsylvania's 67 counties in the coming months and otherwise accept comments submitted online or through other means.

"It's about starting the conversation for legalizing recreational marijuana in Pennsylvania," Fetterman told The Associated Press in an interview Thursday.

The idea has Gov. Tom Wolf's blessing, barely a week into his second term and a new partnership with Fetterman. The move comes weeks after the Democratic governor won re-election and changed his tune on legalizing recreational marijuana, saying the state should take a serious look at it.

Gauging opinion is the responsible thing to do as states increasingly legalize marijuana or, in the case of New Jersey and New York, strongly consider it, Wolf said. A similar tour in his first term on the opioid-addiction epidemic proved valuable to crafting state policy, he said.

"We are actually trying to figure out this issue, where the people of Pennsylvania are, what is it we can learn from them in terms of what we ought to be doing here," Wolf told a Capitol news conference later.

It also comes amid a growing worldwide embrace of marijuana, with billions of investment dollars pouring into cannabis companies and main street brands saying they are considering jumping in the pool.

Wolf signed Pennsylvania's medical marijuana law in 2016, and he has overseen the program's implementation, beginning with the first sale last February. His administration also is starting to license commercial hemp production under a new federal law.

Legalizing the sale of marijuana for recreational use would require action by Pennsylvania's Republican-controlled Legislature.

While lawmakers overwhelmingly approved Pennsylvania's medical marijuana program, the Legislature has been hostile to the idea of legalizing recreational use. Senate Majority Leader Jake Corman, R-Centre, last month criticized marijuana as a "gateway drug," but Fetterman said research he has read supports no such theory.

Fetterman said he supports legalizing marijuana because criminal penalties tend to be imposed disproportionately on minorities and enforcing the law over possession of small amounts is a waste of law enforcement resources. He also said legalizing its sale could mean new tax revenue for the state, and so many people already use it, "it's not like it's not already out there."

Still, Fetterman said the listening tour is designed to hear from all sides and gather as much feedback as possible before he reports back to Wolf. He hopes the feedback helps make the case for legalization, he said.

"I would like to think so, but we're also going out there to listen to everybody," Fetterman said. "We want to get everyone's views, and there are differing opinions on things and we want to reach out and develop some kind of a consensus on where we can go as a state."

A general consensus may already be there.

A 2017 poll by Franklin and Marshall College in Lancaster found that 59 percent of those Pennsylvanians surveyed supported the legalization of marijuana use.