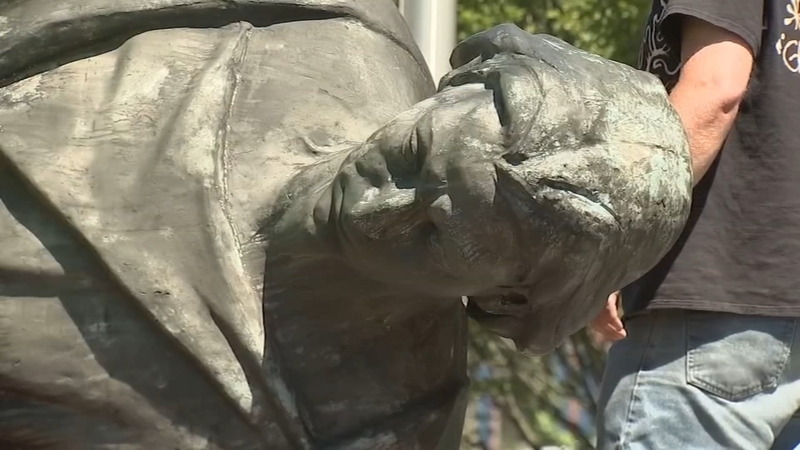 CAMDEN, New Jersey (WPVI) -- The Christopher Columbus statue in Camden's Farnham Park was standing for over 100 years. Neighbors say they've been fighting for at least 40 of those to have it removed.

On Thursday, the city knocked it down.

"I, as the mayor of the city of Camden, made the decision to take this statue down," said Mayor Frank Moran on Facebook Live.

The city called the statue a symbol of racial division. Historians say a reckoning with Christopher Columbus has been coming.

Neighbors say while they're glad it's gone, they wanted to take it down on their own terms, after a planned peaceful protest Saturday.

"Our protest was being undermined so that when we got here with 300 black men and a peaceful protest, we would not have the statue that the people wanted to publicly condemn and call for its removal," said Pastor Levi Combs III.

"Enough is enough. We need everybody to wake up, stand up, and speak up because everybody's voice matters," said Troy Oglesby Sr., a civil activist in the neighborhood.

Other cities are making the same decision about controversial monuments. In Wilmington, the city started removing statues of Columbus and Caesar Rodney.

In Philadelphia, there's a renewed effort around a 3-year-old petition to rename Taney Street, named for the Supreme Court chief justice who authored the Dred Scott decision, saying black people could not be American citizens.

The mayor's office says it would support renaming Taney Street.