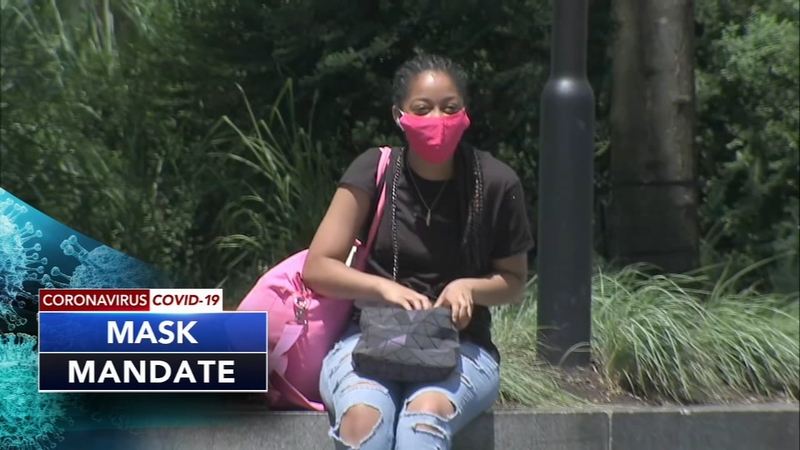 Since April, Wolf's administration has had a standing order that businesses must require employees and customers to wear masks.

Under the new order, a mask or face covering must be worn whenever anyone leaves their home and where it is consistently impossible to remain six feet away from other people. A few exceptions include:

- Anyone who cannot wear a mask due to a medical condition
- Anyone in a job in which wearing mask would create unsafe conditions, including operating equipment or a task determined by workplace safety guidelines
- Anyone who cannot remove the mask on their own
- Children under the age of 2
- Individuals who are communicating or trying to communicate with someone who is hearing impaired

"The sooner we can all get to the point where all 13 million Pennsylvanians recognize ... that when we say, 'we wear masks,' that's one way we're going to reduce the risk of infecting other people," Wolf said at a news conference Wednesday just before his administration announced it was expanding the mask order.

Sandra Radich says she hopes everyone, including the younger demographic, listens to the mandate.

"I'm in the older category and I want to keep safe. We all want to come out of this and have a good summer and have a good holiday, but right now it doesn't look like we're going to get there," said Radich.

John Diehl says things were a little different on SEPTA.

"I'd say probably 5 out of 7 people didn't have masks on in the train. Most of the people I saw were young people."

Outside the city, in Upper Darby, residents are ready to mask up.

"If you're looking and paying attention to what's going on around you, you have to be prepared for it. So we're going to wear our masks and sanitize our hands," said Kevin Harrison.

"It's like wearing a seat belt," Wolf said. "The sooner we get to the point of saying, 'I think this is good for me,' the sooner we're going to defeat this disease," Wolf said.

Wolf's broader mask order boosts Pennsylvania into the ranks of about 13 other states, according to information from the National Governors Association, as more states move aggressively to adopt such a requirement.

The expansion comes as Americans are dealing with surging cases of COVID-19 and confusion over best practices in public, especially on masks. It also comes amid alarm from officials in Philadelphia and Allegheny County about rising numbers in their daily case reports.

In a statement, Wolf said the mask-wearing order is essential to stopping the recent increase in COVID-19 cases in Pennsylvania, "hot spots" that can be traced to situations where Pennsylvanians were not wearing masks or practicing social distancing.

Those are two practices "that must be adhered to if we want to maintain the freedoms we have in place under our reopening," Wolf said.

In Philadelphia, city officials on Tuesday halted plans to allow indoor dining, bars, gyms and fitness centers to reopen, with officials saying its new case increases of over 100 each day are too many.

Officials in Philadelphia and New Jersey have also issued a travel advisory, stating anyone traveling to and from states where coronavirus cases are skyrocketing should self-quarantine for 14 days.