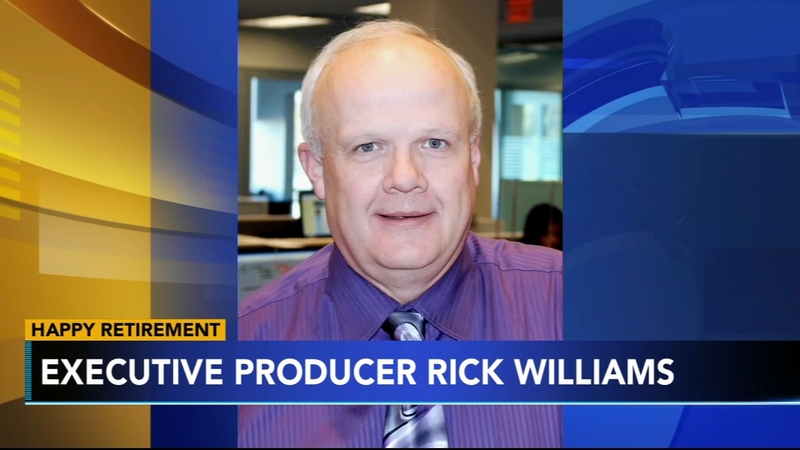 PHILADELPHIA (WPVI) -- One of the true pillars of Action News retired on Wednesday.

The executive producer of the 11 p.m. newscast, Rick Williams, is leaving the station after dedicating nearly 40 years on the job.

On August 23, 1982, a twenty-something from Columbus, Ohio, walked into Channel 6 for the first time to begin producing the weekend news.

You know the name "Rick Williams" as belonging to our long-time and beloved anchor of the 5 o'clock news.

But inside Channel 6, there are two Rick Williamses, and by far the louder of the two is Rick Williams, executive producer.

Nobody has to guess if Rick is happy with a reporter's live shot, or happy with the way a piece of video was shot, or with a particular graphic, we all know, immediately. But that's part of the magic that is Rick. Every one of us has, for decades, tried to make Rick happy.

When he left the weekend news, Rick became producer of the 6 o'clock news.

Our Jim Gardner was honored to partner with Rick to keep viewers informed over the dinner hour for 13 years.

Rick had an intuitive sense of how to produce a compelling, fast-paced half-hour of news, one that prioritized accuracy, and urgency. Rick made sure we put the "action" in Action News.

For the last 20 years, Rick has been an executive producer, with an opportunity to make a lasting imprint on our station. And that he has done.

Rick and his wife Tina now get to board their travel trailer and continue exploring the nooks and crannies of the country they so desperately love.