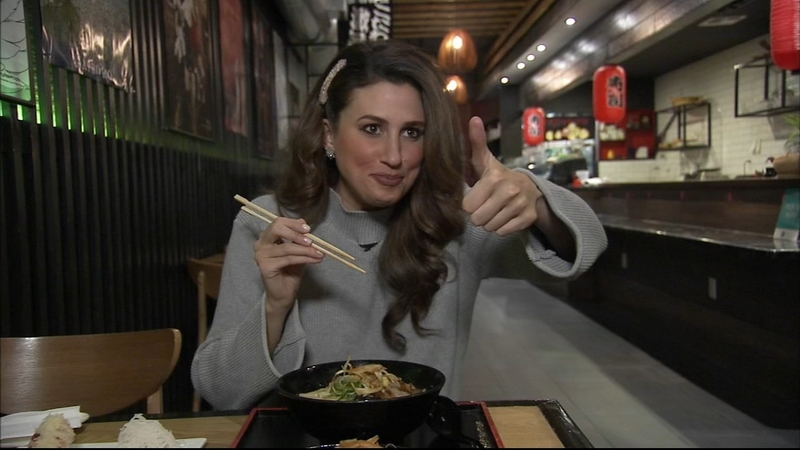 PHILADELPHIA (WPVI) -- In Chinatown, the restaurant options are endless, so bring your appetite, you're going to need it. Here are some of the spots we visited in the third part of the Top 6 Restaurants in Chinatown!

Megumi Japanese Ramen and Sushi Bar opened in 2017, when the Obayashi family came to the United States from Japan.

They told me that they wanted to spread their Japanese ramen recipe to Americans, and let me just say, I'm sure glad that they did.

It takes two hours to make the pork that goes into each bowl, and they import their noodles all the way from Japan. I tried a pork miso ramen, and another with an added homemade spicy sauce.

They have amazing sushi, too! They made me one of their special rolls, called the "Out of Control Roll." It was so good I forgot to add soy sauce!

They are closed on Tuesdays, but open for dine-in and takeout every other day of the week.

Sang Kee, a Hong Kong BBQ style restaurant on the corner of 9th and Winter streets has been run by the Chow family for 40 years.

They do a lot of things well including bubble tea and wonton noodle soup with a secret special broth.

But if it looks like a duck, and quacks like a duck...it's probably being served here. They go through at least 700 ducks a week that they make Peking duck style, their most famous entrée and to-go order.

I even got a lesson in making Peking duck pancakes, which by the way you can also order to put together for a fun night at home.

For now, dinner at Sang Kee is takeout only; and even though they say that they miss their customers, they're still doing well - I guess that duck speaks for itself!