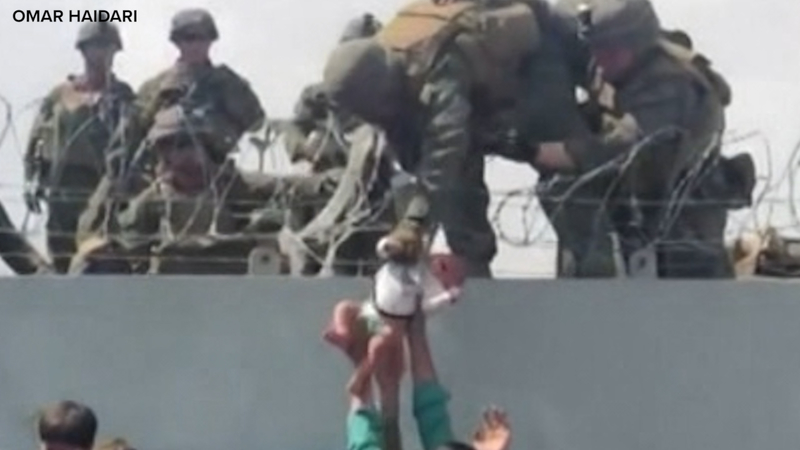 KABUL, Afghanistan -- As tens of thousands of Afghans and Americans race to flee the Taliban-controlled Kabul, one dramatic image shows a U.S. Marine reaching over the razor wire atop a barrier and plucking a baby by the arm from a crowd.

The widely seen video shared on social media shows the baby, wearing only a diaper, being pulled up over a barbed-wire topped wall.

"The baby seen in the video was taken to a medical treatment facility on-site and cared for by medical professionals," Maj. James Stenger, a spokesman for the Marines, wrote in an email. "I can confirm the baby was reunited with their father and is safe at the airport."

It was not clear when the incident happened.

Tens of thousands of Americans and Afghans wait nervously to to see whether the U.S. will deliver on President Joe Biden's evacuation vow.

Terrified that the new rulers would commit such abuses and despairing for their country's future, thousands have raced to Kabul's airport, where chaotic scenes continued unabated. People seeking to escape struggled to get past crushing crowds, Taliban airport checkpoints and U.S. bureaucracy.

Video images showed crowds gathered in the dark, and mothers cradling their children in the oppressive heat during the day. Occasionally someone shot a stream of gunfire into the air.

Reports of planes leaving at least partly empty underscored how difficult it still is for people to get into the airport. In an indication of the extent of the chaos, the Belgian foreign affairs ministry confirmed that one of its aircraft took off from Kabul without a single passenger because the people who were supposed to be on board got stuck outside the airport.