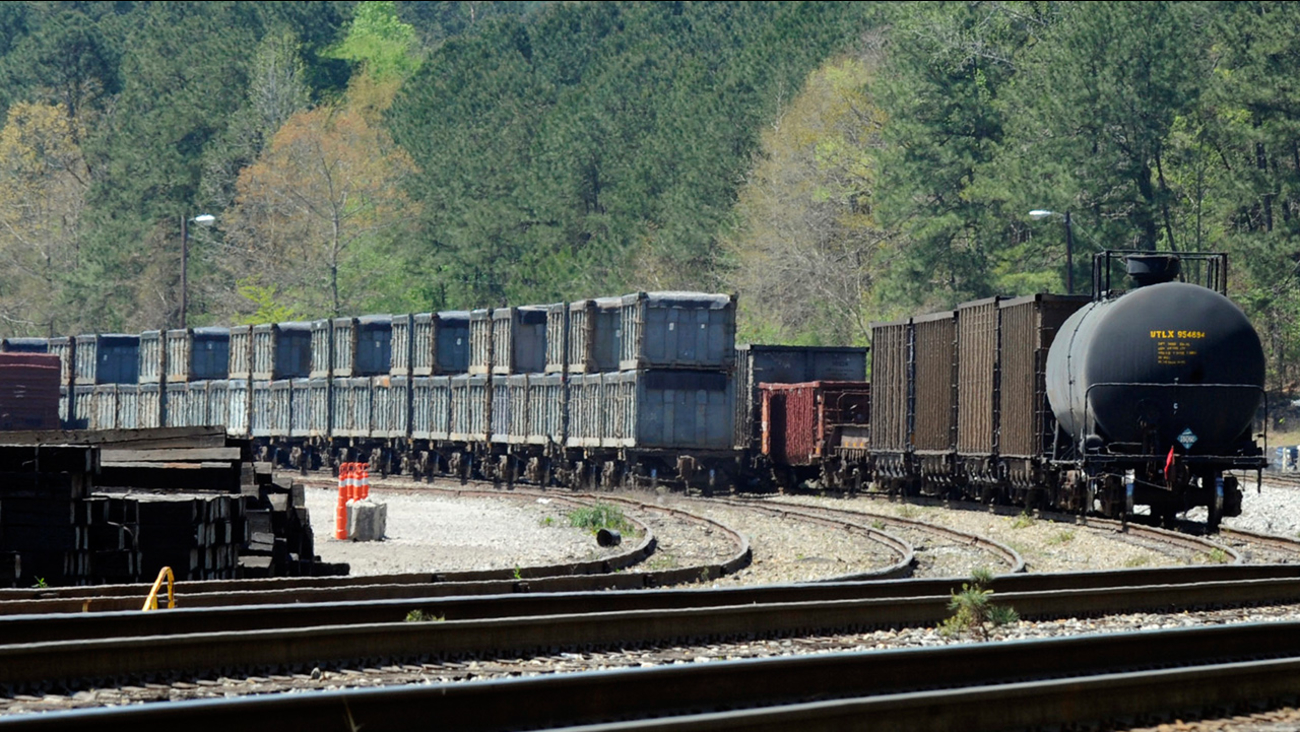 This April 12, 2018 photo shows containers that were loaded with tons of sewage sludge in Parrish, Ala. More than two months after the so-called "Poop Train" rolled in from NYC. (AP Photo/Jay Reeves)

PARRISH, Alabama -- A stinking trainload of human waste from New York City is stranded in a tiny Alabama town, spreading a stench like a giant backed-up toilet - and the "poop train" is just the latest example of the South being used as a dumping ground for other states' waste.

In Parrish, Alabama, population 982, the sludge-hauling train cars have sat idle near the little league ball fields for more than two months, Mayor Heather Hall said. The smell is unbearable, especially around dusk after the atmosphere has become heated, she said.

All kinds of waste have been dumped in Georgia, Alabama and other Southern states in recent years, including toxic coal ash from power plants around the nation. In South Carolina, a plan to store radioactive nuclear waste in a rural area prompted complaints that the state was being turned into a nuclear dump.

In Parrish, townspeople are considering rescheduling children's softball games, or playing at fields in other communities to escape the stink.

Sherleen Pike, who lives about a half-mile from the railroad track, said she sometimes dabs peppermint oil under her nose because the smell is so bad.

"Would New York City like for us to send all our poop up there forever?" she said. "They don't want to dump it in their rivers, but I think each state should take care of their own waste."

Alabama's inexpensive land and permissive zoning laws and a federal ban on dumping New Yorkers' excrement in the ocean got the poop train chugging, experts say.

"It's easy for them to zip into a rural or poor community and set up shop and start making a ton of cash," he said.

The poop train's cargo is bound for the Big Sky landfill, about 20 miles east of Parrish. The landfill has been accepting the New York sewage sludge since early 2017. Previously, it was transferred from trains to trucks in nearby West Jefferson, but officials there obtained an injunction to keep the sludge out of their town.

The sludge "smells of dead rotting animals as well as human waste," West Jefferson's attorney said in a lawsuit against Big Sky Environmental LLC. It also caused the community to become "infested with flies," the complaint states.

After West Jefferson went to court, the train stopped in late January in Parrish, which lacks the zoning regulations to block the train cars. It's sat there ever since.

"We're probably going to look at creating some simple zoning laws for the town of Parrish so we can be sure something like this does not happen again," the Parrish mayor said. Hall said she's optimistic the sludge will all be trucked to the landfill soon.

New York City has discontinued shipping it to Alabama for the time being, said Eric Timbers, a city spokesman. Its waste, recovered from the sewage treatment process and often called "biosolids," has been sent out of state partly because the federal government in the late 1980s banned disposal in the Atlantic Ocean.

In an earlier trash saga, a barge laden with 3,186 tons of non-toxic paper and commercial garbage from Long Island and New York City wandered the ocean for months in 1987, seeking a place to dump it after plans by a private developer to turn it into methane gas in North Carolina fell through. It was turned away by North Carolina, Alabama, Mississippi, Louisiana, Texas, Florida, Mexico, Belize and the Bahamas.

Brooke's Black Warrior Riverkeeper group last year opposed continued permits for the Big Sky landfill. Rural parts of Alabama are "prime targets" for landfills that accept out-of-state waste, it argued, meaning "that Alabama was becoming a dumping ground for the rest of the nation."

Nationally, the waste and recycling industry generates more than $93 billion in gross revenue annually, said Brandon Wright, a spokesman for the National Waste & Recycling Association. Wright said there are many reasons waste is sometimes transported out of state. There might not be enough landfill space nearby "and the waste has to go somewhere, so it gets transported out of state," he said.

Alabama and other Southern states have a long history accepting waste from around the U.S.

A former state attorney general once described a giant west Alabama landfill as "America's Pay Toilet." It was among the nation's largest hazardous waste dumps when it opened in 1977. At its peak, the landfill took in nearly 800,000 tons of hazardous waste annually.

Plans to dump coal ash in Southern states have been particularly contentious. Each year, U.S. coal plants produce about 100 million tons (90 metric tons) of coal ash and other waste; more than 4 million tons of it wound up in an Alabama landfill following a 2008 spill in Tennessee.

In Parrish, the mayor hopes the material in the train cars is removed before the weather warms up.

"We're moving into the summer, and the summer in the South is not forgiving when it comes to stuff like this," she said.