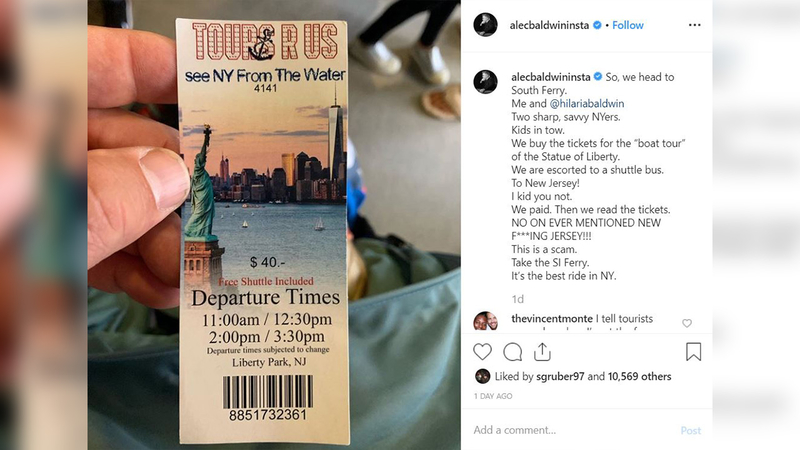 NEW YORK -- Alec Baldwin says he was duped by a Statue of Liberty scam over the weekend, and since, New York City has announced a crackdown against swindlers targeting tourists.

The 61-year-old actor posted to social media Monday that he and his wife, "Two sharp, savvy NYers," bought $40 tickets for a "boat tour" of the Statue of Liberty. Instead, Baldwin and his family were escorted to a shuttle bus headed to New Jersey.

"I kid you not. We paid. Then we read the tickets. NO ON EVER MENTIONED NEW F***ING JERSEY!!! This is a scam," Baldwin wrote.

Baldwin says his family ultimately ended up taking the Staten Island Ferry, which is free and passes the Statue of Liberty.

New York City Department of Transportation spokesman Scott Gastel said the shuttle bus the Baldwins were directed to transports passengers from lower Manhattan to New Jersey, where they get on a boat that offers views of the Statue of Liberty.

A message was left with the tour operator that apparently sold Baldwin the tickets.

A day later, New York City Mayor Bill de Blasio announced that the city will expand its efforts to stop companies from misleading tourists and operating buses in New Jersey without permits.

Cease and desist letters were sent to Freedom Cruises and Sphinx Transport believed to be running this bus to New Jersey scam. The mayor said the NYPD will also be continuing to enforce against ticket sellers who intimidate tourists in the area surrounding Battery Park.

"The Statue of Liberty is an enduring symbol of the promise of the America," said de Blasio, a Democrat. "Tourists and visitors have been taken for a ride, and it's unacceptable. We won't let up until illegal and deceitful practices are a thing of the past."