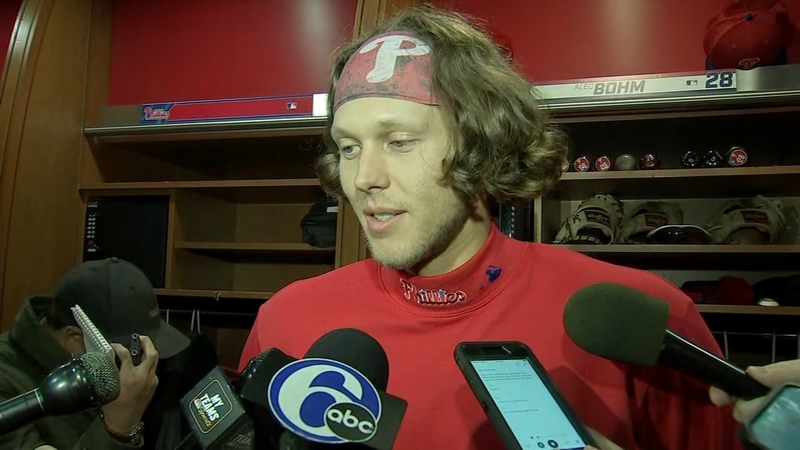 PHILADELPHIA (WPVI) -- A night after saying, "I f---ing hate this place," Phillies third baseman Alec Bohm got a standing ovation from the Philadelphia crowd.

The video featured above is from our original report.

Bohm, who made three errors Monday in a 5-4 win over the New York Mets and later apologized for how he vented his frustration, came in as a pinch-hitter in the eighth inning Tuesday in the second game of the series. He received an ovation before grounding out.

Last night, Alec Bohm admitted to letting his emotions get the best of him when he said "I f****** hate this place" on the field after fans sarcastically cheered him. He apologized after the game

"It was cool, it was really cool," Bohm said after Tuesday's 2-0 loss, according to The Philadelphia Inquirer. "I appreciated it. At the end of the day, if you have siblings, you fight with your siblings one second, and then you're best friends again.

"All they want is transparency. We all want the same thing. We're all in this together."

RELATED: Phillies' Alec Bohm says emotions got best of him after errors, leading to choice words

"That's about as tough a night as you can have on the field, and emotions got the best of him," Girardi said. "What I'm proud of is he owned up to it, he responded well in the game, he helped us win a game [Monday] and he learned from it. That's what you have to do."

Girardi added, "Philadelphia is a great place to play. They want effort. They expect you to be honest and take responsibility. He did all those things. He had a great ovation. I applaud the fans because it probably meant a lot to that kid because I'm sure last night was a tough night for him. The fans responded great to him and probably means a lot to him."

"Everything that I've been led to believe about Philadelphia, that was the exact opposite. That was incredible," Castellanos said, before tipping his cap. "Hats off to the City of Philadelphia for having their player's back like that. It's incredible."

Bohm made three errors at third base in the first three innings Monday, and cameras caught him having some choice words after his second error.

However, a rally he ignited with a leadoff walk -- and owning up to his mistake -- might have soothed hard feelings.

Bohm said "emotions got the best of me" and that did not mean any offense toward the franchise or Philadelphia.

"I said it. Do I mean it? No," Bohm said. "It's a frustrating night for me, obviously. Made a few mistakes in the field. Look, these people, these fans, they just want to win. You heard it, we come back, they're great. I'm just sorry to them. I don't mean that."