WPVI
By Brock Koller
PHILADELPHIA (WPVI) -- A Philadelphia-based artist is giving back to communities across the country in a very creative way after hearing a popular and meaningful event has been postponed.

Dan Duffy, the man behind Philly Word Art, is raising funds for ALS Association chapters throughout the country through proceeds from his newest piece.

"Luckiest Man" shows baseball legend Lou Gehrig - drawn using the words from his famous speech where he announced his retirement from the sport. 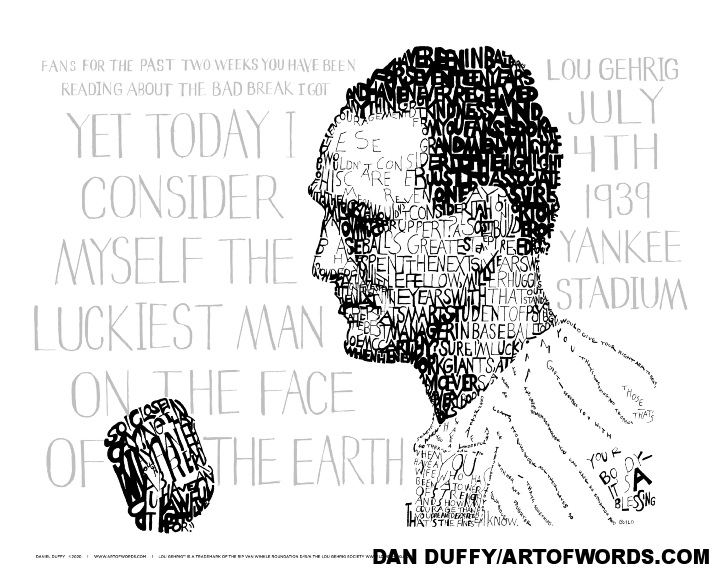 This artwork will help raise money for Project Main St and the Lou Gehrig Society throughout the month of May, ALS Awareness Month.

Duffy told 6abc.com he had this piece done many years ago, but didn't have any rights or permission from Gehrig's family.

It was because of the Phillies that he decided to give it another try to get this piece of art out there.

"When I first started, about 10 years ago, the Phillies were the first pieces I did, Brad Lidge and Harry Kalas, and one of the first events I ever did with the Phillies was the ALS Phillies Phestival, which is the coolest event the Phillies have every year," Duffy told 6abc.com.

But when Duffy heard the 2020 Phillies Phestival was postponed due to the coronavirus pandemic, he reached out to the Gehrig family once more for permission to release his print, telling them that a portion of the proceeds will go ALS charities.

Duffy said the original copy of the work is hanging in Ripley's Believe It or Not in New York City.

A portion of the proceeds from all of his Philadelphia baseball pieces will go to the ALS Association Greater Philadelphia Chapter.
Amyotrophic lateral sclerosis (ALS), also known as Lou Gehrig's Disease, is a progressive neurodegenerative disease that affects nerve cells in the brain and the spinal cord. Patients in the later stages of the disease may become totally paralyzed.