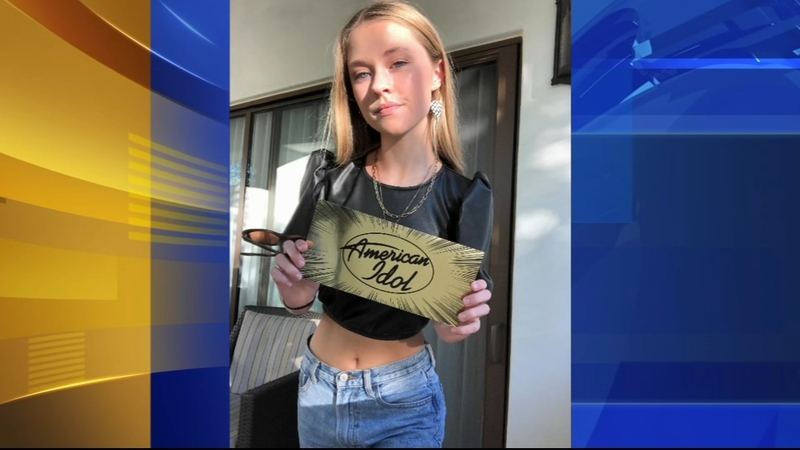 PHILADELPHIA (WPVI) -- American Idol wrapped up their audition shows with another talented group of singers vying for their ticket to Hollywood. Among those hopefuls was Sadie Leigh from Fort Washington, Montgomery County who earned herself a golden ticket.

The 20-year-old singer/songwriter is a junior at Temple University.

"My dad and I have been making music for as long as I can remember," said Sadie. "I grew up doing gigs with my dad. He's really the one who inspired me to start music, and that's why it was so special that he was able to come with me to my audition and accompany me."

Sadie was pretty much born making music. She's one of three singing sisters.

"We posted a cover of an Adam Lambert song, which is so funny to think that now I'm following in his footsteps," she said.

Another sign? The story behind her single "La La La," which she wrote in a music room at Temple.

American Idol wraps up audition shows this weekend with another talented group of singers vying for their ticket to Hollywood. Among those hopefuls is Sadie Leigh from Montgomery C

"I wrote that about actually wanting to go to L.A. and pursue music," said Sadie. "The crazy thing is that flash forward to now, in my third year at Temple, and I got to experience my dream. I got to go to L.A. American Idol really just made it happen for me."

And while it may feel like fate, her dad David Gustafson says it was always in Sadie's stars.

"When she was really, really young, you could just tell she could really, really sing," said David. "The way I always tended to put it is that she's legit."

During the pandemic, when stages went dark, Sadie did live stream shows on Facebook. That's how Idol found her.

"The goal of my live streams was to bring music and bring some light to people in such a dark time," said Sadie. "I think I ended up reaching a broader audience than I would have intended."

"When I was in the audition room, it was just like any other gig except it was the most important gig I've ever done probably," she said.