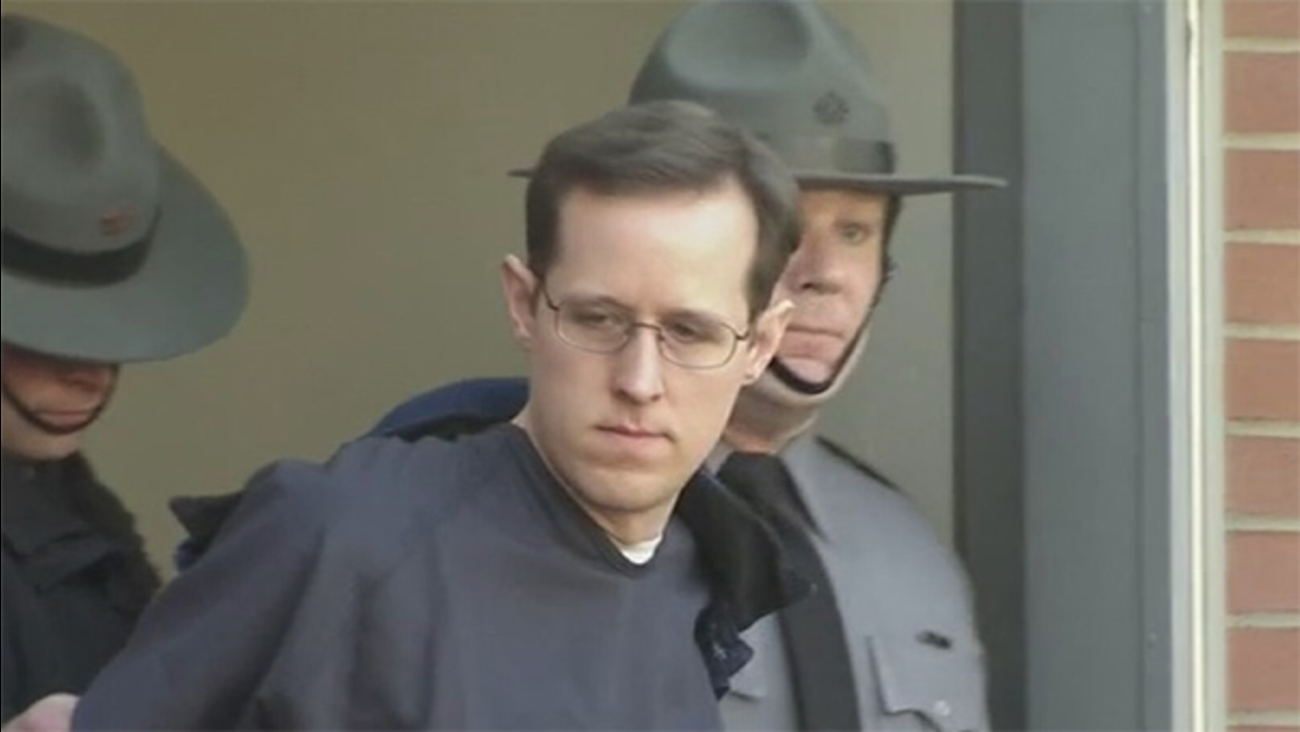 HARRISBURG, Pa. -- Pennsylvania's highest court peppered a defense lawyer and a prosecutor with questions Thursday about the police interrogation of a man later convicted of killing one state trooper and wounding another to act out his anti-government beliefs.

Eric Frein, 35, on death row for the September 2014 ambush slaying of Cpl. Bryon Dickson II outside a police station in the Pocono Mountains, is arguing he deserves a new trial because investigators got a confession out of him after he declined to waive his Miranda right to remain silent.

"We believe it's a simple matter, that if Mr. Frein unequivocally asserted his right to silence, then the commonwealth should have scrupulously honored the invocation of that right," said his lawyer, William Ruzzo.

He said that if investigators wanted to question him, they would have needed a waiver by Frein of his Miranda rights, made after some time had elapsed after he first declined to waive those rights, or in a location different from where he was initially interrogated.

Some justices indicated they may end up weighing that issue against what was described as a vast amount of evidence used to convict him.

"Tell me why this should not be harmless error and we allow this conviction to stand?" asked Justice Kevin Dougherty.

Ruzzo said the videotaped confession was "like no other evidence" and "so damaging that it was tough to repair," showing Frein smoking a cigarette and seeming to be comfortable with the pair of investigators.

He said the image of Frein that it captured also affected the decision to impose the death penalty.

"There's a ton of - there's a lot of evidence, there's no question about that," Ruzzo told the justices.

After Frein was read his Miranda rights, he said he did want to talk about where he had hidden a rifle or rifles in the woods, which Ruzzo said was prompted by concern children would find them.

"This is ambiguous, 'I'll talk to you about some stuff but not others,'" Tonkin said. "He doesn't unambiguously say, 'I don't want to talk to you.'"

Defense lawyers are also arguing that the state police should have permitted Frein to speak with an attorney his family retained the night he was captured. The lawyer was kept outside during three hours of questioning.

They also say the trial judge allowed too much testimony about the impact of the crime on victims - 10 witnesses over two days - describing it in a court filing as "emotionally charged, cumulative and much more prejudicial than probative."

Frein was convicted of lying in wait outside the Blooming Grove state police barracks in September 2014 before killing Dickson with two shots and leaving Trooper Alex Douglass so badly wounded he has required at least 18 major surgeries.

Frein was identified as a suspect soon after the shooting, in part because a neighbor noticed his vehicle had been abandoned after becoming stuck in a drainage pond not far from the murder scene. Frein left his wallet inside the vehicle.

Prosecutors have said Frein spoke of wanting to start a revolution and described Dickson's slaying as an "assassination." Frein allegedly said he wanted to "wake people up" and "make a change (in government)."

In a letter to his parents drafted while he was hiding out, Frein wrote that he did not "know what the revolution will look like or even if it would be successful."