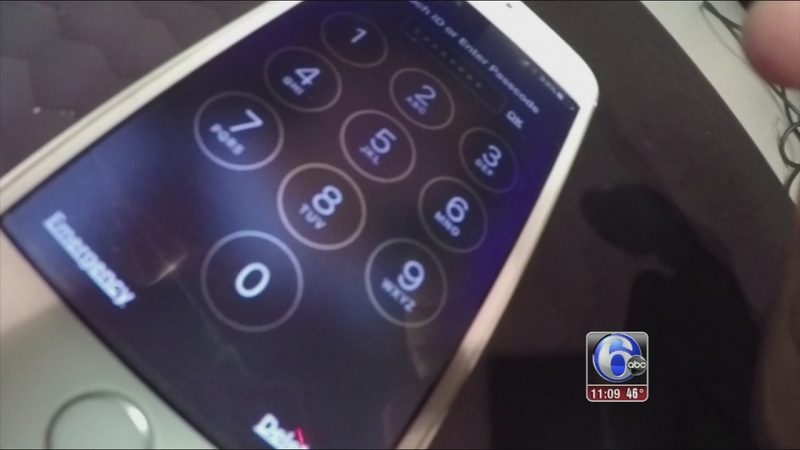 CENTER CITY (WPVI) -- Demonstrators are expected to gather outside Apple stores Tuesday in support of the company which is refusing to help the FBI hack into a locked phone belonging to one of the San Bernardino shooters.

The iPhone belongs to gunman Syed Farook, one of two suspects authorities say are responsible for the massacre of 14 people.

That's why investigators are eyeing Farook's cell phone, a device D'Ovidio says is only useful if unlocked.

"They know if they can't find some mechanism to bypass this security system, they're never going to get into the phone because the data will be wiped clean," D'Ovidio said.

The FBI says it needs to be able to guess the terrorist's passcode without the phone self-destructing.

"When the suspected terrorist is deceased, and given what they did, I think there's definitely less of an expectation of privacy - and not one here. And I hope Apple does the right thing," said Jason Angelo of Center City.

But not every Apple customer is on board. Some are torn.

"People aren't recognizing that as personal property. You have a right for that to be protected," said Heidi Thomas of Washington, D.C.

"You always wonder in the wrong hands could be used for nefarious purposes, I would feel nervous about that. At the same time, I want everything to be done to help the security of our nation," said James Won of Wynnewood, Pa.
Related topics:
center city philadelphiaprotestphilly newssan bernardino mass shootingapplefbi
Copyright © 2021 WPVI-TV. All Rights Reserved.
TOP STORIES
Soccer fans accused of beating man to death at Pat's King of Steaks
Video shows Gabby Petito's police encounter before disappearance
Girl, 6, hit by vehicle while fleeing Philadelphia gunfire
Bialik, Jennings to guest-host 'Jeopardy!' for rest of year
Alex Murdaugh turns himself in for $10M insurance fraud plot
AccuWeather: Not as hot, some downpours today
4 young people shot in past week have ties to one school
Show More
Age-progression picture shows what missing NJ girl may look like today
SpaceX launches 4 amateurs on private Earth-circling trip
4 treated, including firefighter, following rowhome fire in Manayunk
Primark opens at Fashion District Philadelphia
98% of those who died from COVID this year in Philly were unvaccinated
More TOP STORIES News