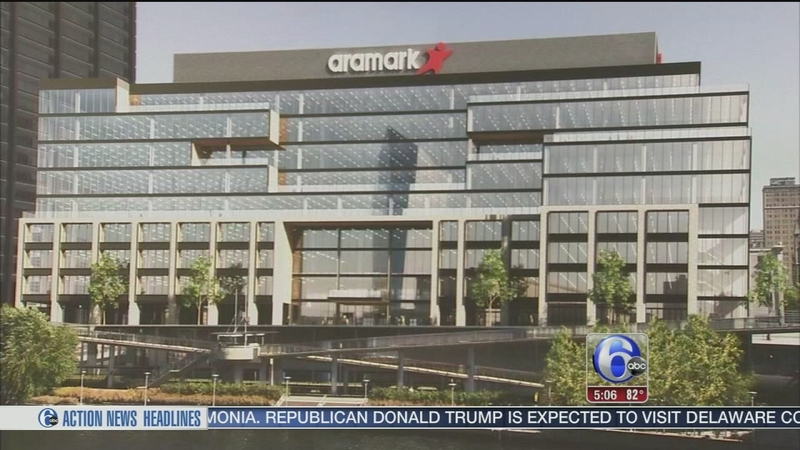 PHILADELPHIA (WPVI) -- Philadelphia-based Aramark Corporation is moving its headquarters, but not far.

The company says it will leave its high-rise at 11th and Market, for a spot closer to the Schuylkill River, the former Marketplace Design Center.

It means thousands of jobs will stay in the city.

In dramatic fashion Monday, Aramark unveiled its new world headquarters at 2400 Market Street, right on the banks of the Schuylkill River.

The $15 billion global food services company will be the anchor tenant in the building as it is transformed into a modern, 600,000 square foot, nine story complex.

The announcement was made from atop a building across the river, giving a sweeping view of the new site.

"We're excited because it's going to continue to give us the ability to attract some amazing employees, not only now, but in the future in a very vibrant city in a beautiful state," Aramark Chairman, President, CEO Eric Foss said.

Aramark's lease is expiring at its namesake tower at 1101 Market Street in 2018. Months ago, the company announced it would stay in Philadelphia; it was a big relief considering the company is a major employer in the region.

"Aramark is considered a cornerstone in our community. Located in Philadelphia for 55 years, the company employs about 1,200 people in the city and 6,800 in the Greater Philadelphia region," Mayor Jim Kenney said.

The company has 14,000 employees statewide.

A year ago, Aramark started looking for a new home.

Governor Tom Wolf said the city and state sweetened the pot with over $20 million in grants and incentives. He sees that as investment in jobs, of course, but also a guarantee to bring even more improvements to this section of the city.

The company says it will put an emphasis on innovation, sustainability and green space.

Also Monday, Aramark gave $100,000 to support the continued transformation of the Schuylkill River Trail which runs right alongside the building.