Art of Aging: North Philly man taking love of cars to the next level 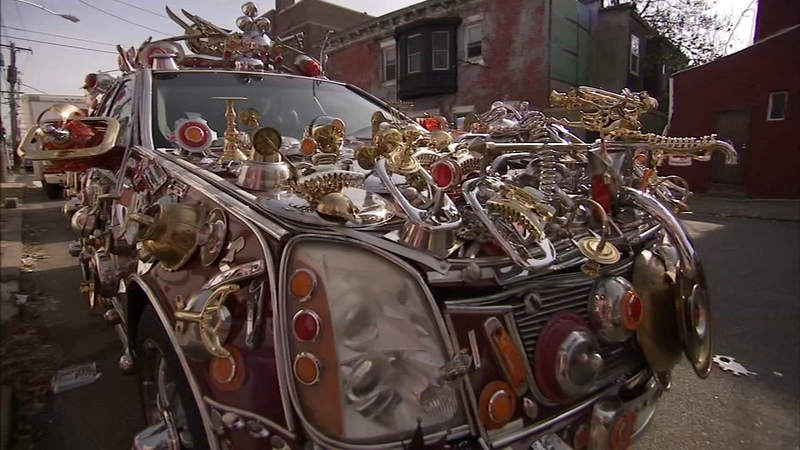 Art of Aging: North Philly man taking love of cars to the next level

NORTH PHILADELPHIA (WPVI) -- Sometimes health issues force us to make lifestyle changes which can be a challenge, but a 75-year-old North Philadelphia resident is embracing it by bringing his love of cars to the next level.

Gilbert Hilton is one driver who's hard to miss.

"Every day I'll be talking to people about this car. Yeah, it's different," he said.

Hilton says he's always had a love of cars, but it was a health crisis that sparked his unusual hobby.

"And when I retired, I went buck wild, partying and having a good time. My heart gave out. Te doctor told me I had six months to live," he said. "Well I had a triple heart bypass about six years ago. I'm happy to be living."

Decorating his cars is a way to occupy his mind.

"I just started putting this stuff on my car. Now where I got that idea from, I don't know," said Hilton.

"This, this is the bling, bling, the Cadillac, the Badillac, we call it. That one, everybody's crazy about that one. That's the mother, and this is the baby," he said, referring to the Stratus. "I call this the spaceship."

Hilton says he goes to Goodwill to hunt for treasures to add to his cars.

"I'm always picking up new pieces. I start taking stuff off and putting stuff on," he said.

Many pieces are household items from doorknobs to picture frames - almost everything but the kitchen sink.

The Badillac wouldn't be complete without a sound system to match.

"I used to be a DJ. When I come down the street, I play the good stuff," said Hilton.

And to think it all started with adding a little chrome to the Caddy.

"A lot of people call me an artist. I don't see that," said Hilton.

But he does relish in the smiles he gets when he rides around town.