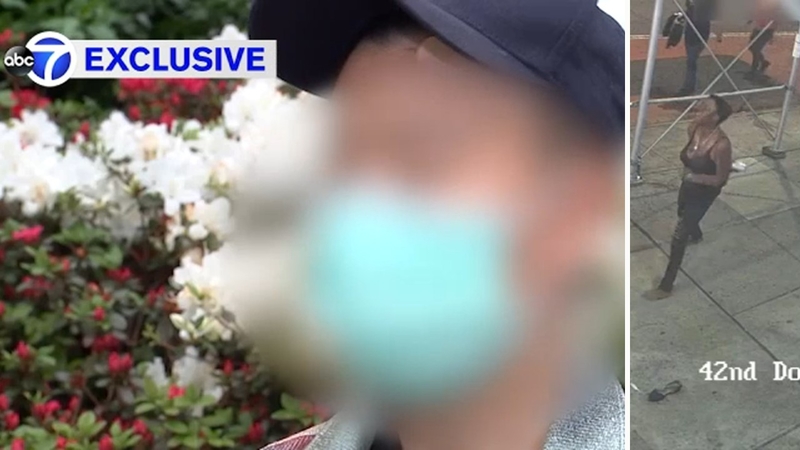 HELL'S KITCHEN, Manhattan -- Police in New York City are looking for a woman who attacked an Asian woman with a hammer Sunday night near Times Square.

The 31-year-old recent Fashion Institute of Technology graduate was walking with a friend to the subway when she was attacked. The pair thought it would be safer for them to go together.

The female suspect struck the Asian woman in the head with the hammer, and the victim collapsed and dropped the bottle of wine she was carrying.

Her blood has been washed away, but that wine still stains the sidewalk.

VIDEO | Police released surveillance footage of the suspect they are looking for:
EMBED More News Videos

Video released by police shows the moment an Asian woman was attacked by a woman with a hammer near Times Square.

The frightened victims managed to disarm the attacker and run for help.

The victim, who only wants to be identified by her first name Theresa, says her physical pain doesn't compare to the psychological scars. She is shaken up and traumatized and in total shock.

Theresa said at first she tried to defend herself, but then when she touched her head, she realized there was a lot of blood.

It was a perfect night for outdoor dining in the Hell's Kitchen neighborhood of New York City, interrupted by the unprovoked violence. It happened around 8:40 p.m., as patrons were enjoying the nice weather.

"Some person came along and hit another person over the head with a hammer," cafe owner Steve Olsen said. "And there was blood all over the place."

Video shows a patron having dinner outdoors who described the horrifying random attack.

"A drunken woman hit them with a hammer in the head," the witness said. "The perp, young fellow and his girlfriend, were walking down the sidewalk and she just came up screaming and hit them in the head. I saw it happen, with a hammer. She's long gone."

Olsen said stunned patrons rushed to the victim's aid, picked her up, sat her down, and washed her off. She was said to be speechless and in shock.

Police said the victim did not know her assailant, and the suspect told her to take off her mask before striking her with the hammer, cutting her on the side of her head.

"She was talking to herself, like talking to a wall, I thought maybe she was drunk or something, so we just wanted to pass through her quickly and when I passed through her, she saw us and said 'Take off your f***ing mask,' which is shocking," Theresa said. "Suddenly I felt my head get hit by something."

She was rushed to the hospital and was said to be stable. She suffered a gash in her forehead, a deep wound on the left side of her head, and needed seven stitches.

Theresa came to New York in 2019 for her masters at FIT.

She went to Taiwan to stay with her parents during the COVID-19 pandemic and came back last month to start looking for work. Her parents were concerned about the anti-Asian violence.

"My mom actually told me please be careful, there's a lot of Asian crime happening in America," Theresa said.

Theresa just spoke with her mother and will go back to Taiwan for the time being. She said if the right job comes along, she will move back to New York when it's safer.

"If someone commits an act of violence or bias against Asian American New Yorkers, they will suffer the consequences," he said. "And that's what we do every day: Make sure that no offense goes without the right follow through and the right consequences."

Authorities say the suspect is approximately 5-foot-9 and was wearing all black. The incident is being investigated as a possible hate crime.

Meanwhile, business owners say Hell's Kitchen is living up to its name every day, and it is demoralizing.

"Since COVID, this thing has pancaked out," Olsen said. "It's as bad as it ever was in the mid/late 70s."

Police report a 400% increase in hate crimes against Asians compared to this time last year.

Authorities say 49-year-old Jarrod Powell was taken into custody thanks to tips from the community, who identified him as the suspect who stomped the victim in East Harlem in a vicious unprovoked attack.