"What happened in Atlanta really resonated with myself and with a lot of women that identify as Asian American."
WPVI
By TaRhonda Thomas and 6abc Digital Staff 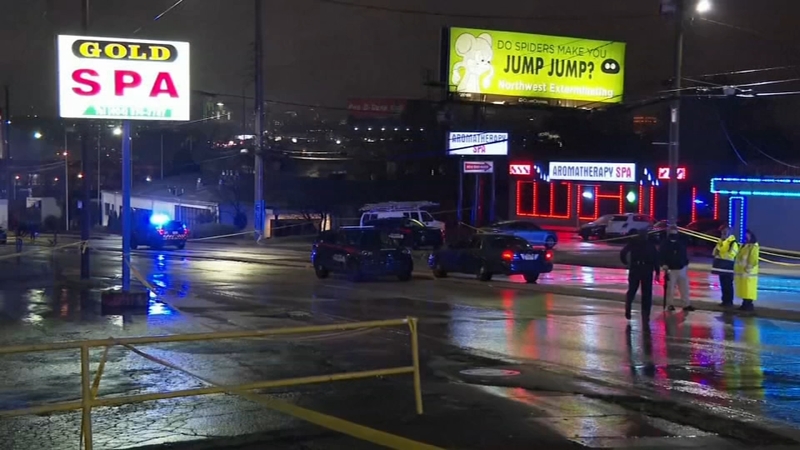 PHILADELPHIA (WPVI) -- Pearl Kim still remembers how she felt on March 16, 2021, as the news broke of a deadly attack at multiple spas in Atlanta.

"It was utterly heartbreaking news," she said.

One year later, it's news that's still fresh in her mind.

"It was frightening for everyone in the community," Kim said, recalling the moment she heard that a gunman attacked at three spas in the Atlanta area, killing eight people. Six of the victims were Asian women.

"What happened in Atlanta really resonated with myself and with a lot of women that identify as Asian American."

As a former special victim's prosecutor for the Delaware County District Attorney's office and the Pennsylvania Attorney General's office, Kim had already placed a focus on working to stop hate crimes.

In the year since the attacks, the calls to stop attacks on Asian people have grown louder. But it has not stopped Asian women from being targeted, including a teenage girl who was attacked on a Philadelphia subway in November 2021.

"With all the hate crimes, anti-AAPI crimes, 70% have been against women," said Monica Khant, executive director of the Asian Pacific Institute on Gender-Based Violence. "There's always been a focus on Asian women being more docile."

"It was literally two miles from home in my backyard," she recalled. "There should be no question that it was fueled by racism."

According to the group Stop AAPI Hate, there were more than 6,200 hate incidents reported to Stop AAPI Hate in 2021. Pennsylvania had the seventh-largest number of incidents in the country.

Some of those reports have come from victims who are now less reluctant to step forward.

"In this current climate, we have seen an increase in reporting," said Kim.
There are also more resources going into the fight against hate.

"Stop AAPI Hate has been actively tracking hate crimes across the country," said Kim. "In addition to that, we have organizations like APABA-PA (Asian Pacific Bar Association of Pennsylvania) that have been trying to extend pro-bono legal services for individuals who qualify that are a victim of a hate crime in Pennsylvania."

It's a sign of progress but not the end of the work.

"There's a lot of attention on this right now. And we need to keep that attention going," said Khant.

She and others are determined that the lives lost in the Atlanta area won't be in vain. She encourages people to continue to talk about the issue especially those outside the Asian community. Resources like bystander training are also something Kim says could help protect people from being targeted in the future.