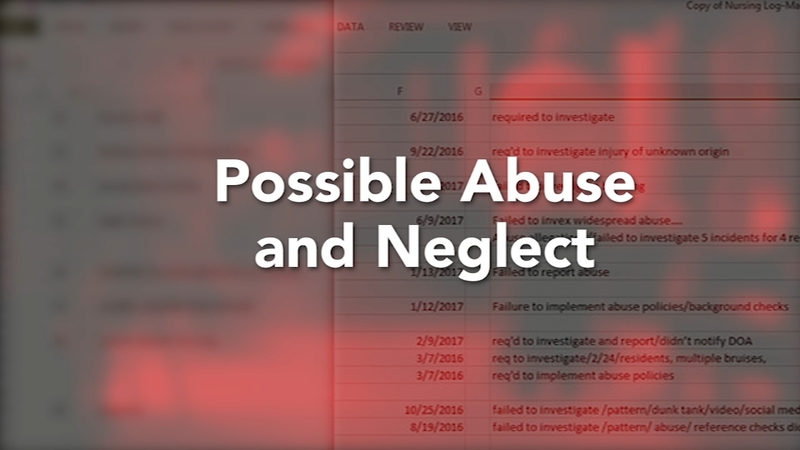 PENNSYLVANIA (WPVI) -- A recent audit by the Federal Government found an alarming number of nursing homes are failing to report suspected abuse, including sexual abuse.

Action News Investigative Reporter Chad Pradelli has been investigating the nursing home industry here in Pennsylvania for the past year.

We looked at every state inspection report in the 5 county region for 2016 and 2017.

We found dozens of cases where nursing homes failed to properly investigate and report neglect, abuse or possible abuse both physical and sexual.

The altercation left Thomas Kilby with a broken neck and gaping wound to his head.

It happened inside the Oxford Health Center Nursing home in January of 2016.

Timothy Kilby, victim's son said, "My father and another person for some reason there was an exchange or words and this person acted out violently, pushing and kicking him."

Four months later, The Pennsylvania Department of Health cited Oxford for failing to report the alleged abuse as required by federal law.

According to Oxford Police records, police only began investigating after Kilby told paramedics on the way to the hospital he'd been attacked.

His family says when they confronted Oxford, the facility downplayed the incident. They're now suing.

Attorney Marty Kardon of Kanter, Bernstein and Kardon said, "They told me what they told my client that it was an unwitnessed fall. But when I say there are two people participating, how is that an unwitnessed fall, well they aren't reliable with dementia."

IN COURT PAPERS, THE FACILITY DENIES ANY WRONGDOING.

Our investigation found state inspectors cited nearly half of all nursing homes in the 5 county region for either failing to investigate and/or properly report possible abuse and neglect in 2016 and 2017. 85 facilities in all were cited.

Among the worst offenders, Suburban Woods Health and Rehabilitation in East Norriton.

This stack reveals all sorts of violations over the past two years.

Twice in 2016, it was cited for failing to report an alleged sexual assault to the state health department and police, including an alleged rape by a nurse's aide.

The facility was also cited for failing to investigate a broken leg and conduct criminal background checks on several employees.

Attorney Sam Brooks of Community Legal Services of Philadelphia said, "It's not in the nursing homes interest to properly report issues and enforce regulations because it affects their bottom line."

Sam Brooks is a nursing home advocate who's been investigating nursing home abuse. He says not only are facilities failing to report abuse or possible abuse, they do not adequately investigate.

He blames both nursing home staff and the State Dept. of Health that is responsible for overseeing them. He looked at every inspection report of nursing homes in Philadelphia from 2012-2014.

"We found 9/10 if you filed a complaint against the facility the Department of Health was not substantiating that complaint. So hundreds and hundreds of complaints were dismissed," said Brooks.

He acknowledges the investigations can be difficult especially when some elderly residents are isolated and suffering from dementia. But he questions some of his findings.

"What we were shocked by is over 3 years of complaints in Philadelphia we didn't find one violation for sexual abuse or purposeful harm," said Brooks.
According to the Department of Health, all of the facilities in our report said they'd take corrective action and conduct audits of incident reports and investigations.

None would go on camera. All released statements saying in part they take abuse seriously. Suburban Woods' parent company released a statement saying it was under different management at the time of the violations.

Suburban Woods, LLC
Saber Healthcare Group was not operating the Suburban Woods facility at the time. It was under different management by Oak HRC Suburban Woods, LLC.
At Saber, patient care is our top priority and we look forward to providing high-quality care for our patients moving forward.