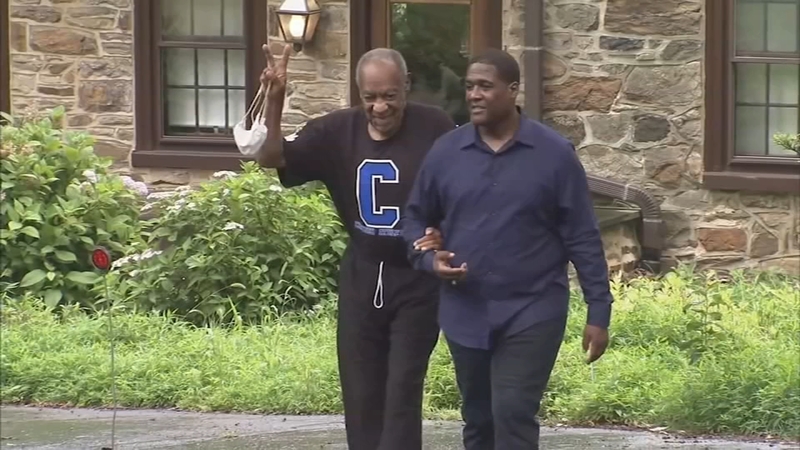 Both Cosby and accuser shocked by comedian's release from prison

ELKINS PARK, Pennsylvania (WPVI) -- Bill Cosby's publicist and crisis manager says he was as surprised as anyone at the news that his client was getting released on Wednesday afternoon.

He'd gotten a tip from a friend the week prior that Cosby's case before the Pennsylvania Supreme Court would likely go his way.

But when Cosby's moment to leave prison arrived, it was a shock to the 83-year-old who had been in jail for nearly three years after being convicted of sexual assault.

"He could not believe what was happening when the officer opened his cell door," said publicist Andrew Wyatt. "He didn't know what was going on. He heard all the inmates say 'Bill get out of here, you're free!"

Lise-Lott Lublin was equally surprised to hear the news but not in a good way.

"I was just like, wow. I don't know what to say at this point," she said of the moment that a reporter called her asking for comment and revealing the news that Cosby would be let out of prison.

Lublin was one of the women who testified against Cosby, saying he drugged and sexually assaulted her in 1989.

"It's unjust that he doesn't die in prison." The former Commonwealth of Pennsylvania victim advocate, who helped the women who testified against Bill Cosby, was beside herself Wednesday after the comedian was released from prison.

On Thursday, his second day of freedom, Cosby exited his Elkins Park home in the Philadelphia suburbs at about 12:45 pm and left in a black SUV.

Wyatt said Cosby would be spending the day visiting friends and reuniting with his wife, Camille. He says that, while Cosby has had no visitors, he has received a number of phone calls.

"Friends from all walks of life all around the world are calling," Wyatt said, adding that Cosby was pushed out of prison in a wheelchair because he's blind. "His high school teammates are calling. He's been on the phone with Mrs. Cosby. We stayed up till 2 this morning. He's like 'I'm afraid to go to sleep because I might think it's a bad dream.'"

Lublin is disheartened by the fact that the Pennsylvania Supreme Court chose to overturn Cosby's conviction. The decision happened after Cosby's legal team made a deal with the former Montgomery County prosecutor who promised not to prosecute Cosby criminally if he testified in a civil case.

"This man has blatantly stated that he would use Quaaludes to have sex with an unconscious woman. I mean, you can't get much guiltier than that," said Lublin.

The Pennsylvania Supreme Court made no mention of Cosby's guilt or innocence when overturning the case. His publicist sees the decision as an exoneration despite a guilty verdict rendered by a jury in the case which reached its decision after another trial resulted in a hung jury.

Lublin says, despite the court decision, she's determined to use her experience to help others.

"We have to do something that's going to elicit a big change," she said