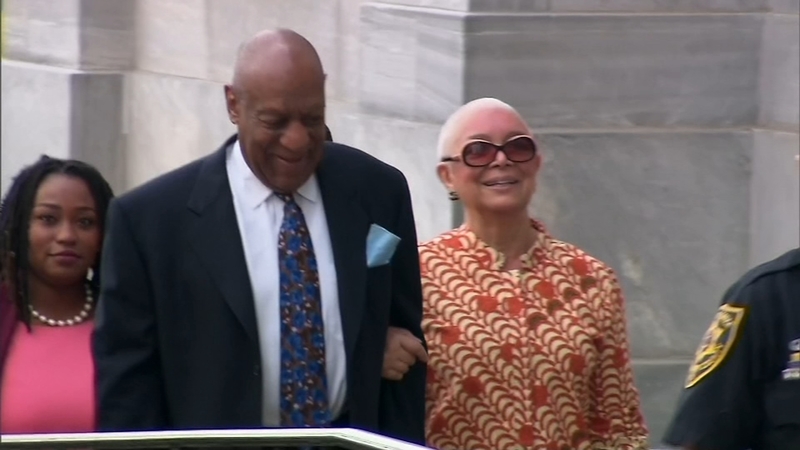 Two of the women who have accused Bill Cosby of sexual assault decades ago said Sunday they hope he will be sentenced to prison time this week.

Lise-Lotte Lublin and Chelan Lasha, who appeared with attorney Gloria Allred, also said they hoped they would be allowed to read victim impact statements before Cosby is sentenced on three felony counts of aggravated indecent assault .

Cosby was convicted of drugging and molesting a woman at his suburban Philadelphia home in 2004 in what became the first celebrity trial of the #MeToo era. A two day-sentencing hearing begins Monday in Montgomery County.

"I really think it's important that he spend some time behind bars," said Lublin, who said Cosby assaulted her when she was 23 in 1989. The then-model said Cosby prodded her to take two drinks to relax. "At some point, he should acknowledge what he's done, and do the time for the crime."

Lasha, who wept during her testimony at the trial last spring, said she prays Cosby is sentenced to 30 years. "He deserves every year."

Lasha said she was a teenage aspiring actress in 1986 when she lay immobilized and unable to speak as Cosby touched her breast and rubbed himself against her leg. She said he gave her a pill he described as an antihistamine.

"He ruined my life at 17 years old," Lasha said. "I have nightmares about it this very day, and I want them to go away, just like him."

More than 60 other women accuse Cosby of sexual misconduct during his 50-year show business career. Five were allowed to testify, while others came to watch the court proceedings.

Allred said she believed the sentencing would be "sending a message" in the #MeToo era. She said Cosby should be sentenced to "a substantial period of time," shouldn't receive probation or house arrest, and shouldn't remain free pending appeal.

"Mr. Cosby should not be treated differently because he is a celebrity," she said. "Judgment day has finally arrived for this convicted sexual predator who betrayed the trust of so many women."

Lawyers for the 81-year-old, legally blind Cosby are expected to stress his age, health problems, legacy and philanthropy. Prosecutors hope to call other accusers to paint Cosby as a sexual predator deserving of prison.