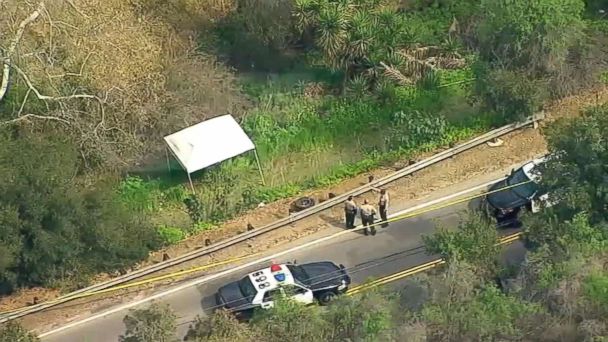 Two people have been detained in connection with the death of a young girl whose body was found in a duffel bag near a Los Angeles-area trail.

Police confirmed the girl's identity as 9-year-old Trinity Love Jones of Los Angeles County on Sunday night and said two persons of interest had been detained for questioning.

"Investigators have detained two persons of interest in this case and they are actively continuing their investigation," the Los Angeles County Sheriff's Department said in a statement Sunday. "Although the Coroner's Office determined the death to be a homicide, the cause of death is being withheld."

Trinity's barefoot body was found last Tuesday along a trail in Hacienda Heights, California. Police had described her as African-American and thin, standing 4 feet 5 inches tall and weighing about 55 pounds.

Authorities said there were no obvious signs of trauma, but her death was ruled suspicious. It's unclear if she was dead before being placed in the bag, according to authorities.

The sheriff department's confirmation came hours after a family came forward to identify the young girl as Trinity.

Family and community members gathered at a makeshift memorial on Sunday near the trail where Trinity was found. The area was decorated with pink flowers, balloons, stuffed animals and photos of the young girl.

"Little girl could've been whatever she wanted to be in life," Jones told ABC Los Angeles station KABC on Sunday.

Officials did not release the identity of the detainees but did say more information would be released later this week.

"Due to the overwhelming response from the news media and tips received from the public, investigators have identified the deceased child discovered on March 5, 2019," the sheriff department said in the statement. "As additional facts are established and verified, investigators anticipate that additional information will be available for release during a press conference later in the week."