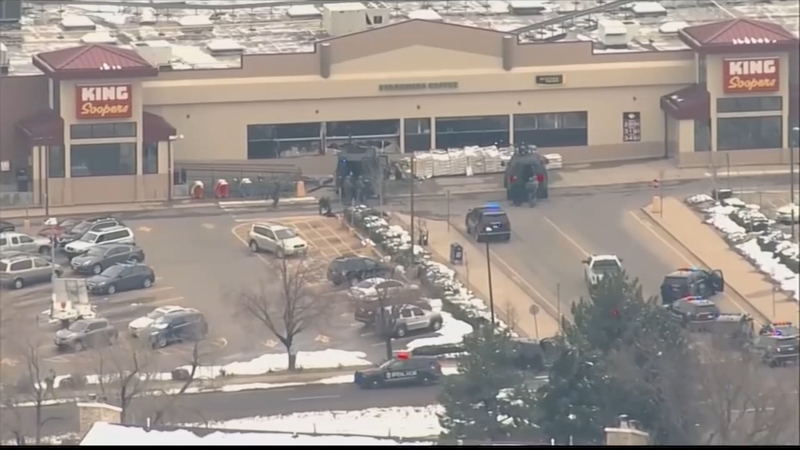 BALA CYNWYD, Pennsylvania (WPVI) -- As Bill Dayag stopped by a grocery store in Bala Cynwyd, Pennsylvania on Tuesday his heart was heavy thinking about the 10 people gunned down in Boulder, Colorado.

"We are deeply distressed about this kind of event," he said while standing next to his wife.

Charles Webb was still trying to digest the news too.

"I just talked to a young lady just now (in the grocery store), and she felt like she is just afraid to come out," he said.

Officer Eric Talley, 51, a father of seven, who was the first officer to respond to the King Soopers store in Boulder when 911 calls about the shooting came in.

Boulder Police Chief Maris Herold said Talley was shot when he rushed into the store to save lives and engaged the suspect in a gunfight. He was among those killed.

Marci Gonzalez has the latest on the mass shooting tragedy at a crowded Colorado supermarket.

The shooting was reported at about 2:40 p.m. local time, police said. Officers arrived within minutes, entering the store and engaging with the suspect, who was shot in the exchange of gunfire, according to police.

The suspect, 21-year-old Ahmad Al Aliwi Alissa, of Arvada, Colorado, suffered a leg wound and was taken into custody at 3:28 p.m. Monday, the chief said.

The suspect has been charged with 10 counts of murder. He was expected to be taken to the Boulder County Jail Tuesday following his release from the hospital, Boulder District Attorney Michael Dougherty said.

The shockwaves of the Colorado shooting have rippled through Pennsylvania, which is feeling the effects of its own gun violence epidemic.

President Biden pledged to do everything in his power to keep Americans safe after a shooting at a Boulder, Colorado, grocery store and pushed a pair of House-passed gun reforms, including a universal background checks measure and an assault weapons ban.

"Four hundred ninety-nine murders in Philadelphia is not normal," said Dr. Dorothy Johnson-Speight of the organization Mothers in Charge, which helps families impacted by gun violence. "There are mass killings here in the commonwealth every day."

More than 300 people virtually attended a Tuesday afternoon webinar hosted by CeaseFire PA as leaders discussed gun violence, saying what happened in Colorado should be a wake-up call for Pennsylvania.

"This is a tragic loss that strikes while our nation is still reeling from a tragic shooting in Georgia," said Gov. Tom Wolf (D -Pennsylvania) referencing the killings in Atlanta last week.

"Firearms were behind the senseless violence of 34 mass shootings in Pennsylvania in the year 2020 alone," added Wolf. "And just yesterday, our nation saw yet another example of the trauma that gun violence brings to communities."

Investigators say the gunman in Boulder used an assault weapon. According to the arrest affidavit, he purchased an AR-style pistol identified as a Ruger AAR-556 pistol six days before the shooting.

A woman who police identified as the suspect's wife told investigators she saw him shooting the weapon in the backyard two days before the shooting.

Colorado does have a ban on high-capacity magazines but does not have a state-wide ban on assault weapons, and neither does Pennsylvania.

On March 23, Boulder Police Chief Maris Herold identified the 10 people killed in a shooting the day before at a King Soopers supermarket.

"I don't know what these people are thinking about with the second amendment. We need gun control," said Diana Post as she talked about the shooting before going to the grocery store.

A group of Pennsylvania lawmakers is now pushing a bill that would require gun owners to report lost or stolen weapons. There's also an effort to push legislation that would temporarily take guns away from people in mental crisis. CeaseFire PA is also pushing for universal background checks.

"It's enough with thoughts and prayers," said Pennsylvania Attorney General Josh Shapiro. "It doesn't have to be this way."

CeaseFire PA has recently been part of announcements criticizing Pennsylvania state laws, saying that they prevent local municipalities from enforcing their own gun laws.

In a press conference on Tuesday, March 23, authorities in Boulder, Colorado, identified the 10 victims and the suspect in deadly shooting the day before at King Soopers grocery store.

Boulder passed a law banning assault rifles in 2018, but a federal judge ruled that the city could not have its own ban against assault rifles. The judge made that ruling just 10 days before the shooting.

The National Rifle Association released this statement on the mass shooting:

"The men and women of the NRA are saddened by this tragic and senseless crime. It is our longstanding rule to wait for all the facts to be known before making any policy statements. Regrettably, gun control advocates have already rushed to politicize this horrific situation - even as most of the salient facts remain unknown. We would like to express our gratitude to law enforcement, first responders, and local officials for their courageous efforts. We support their pursuit of the facts involved."

As President Joe Biden announced support for universal background checks and a ban on assault weapons, he also ordered flags to be lowered to half-staff in remembrance of the victims.