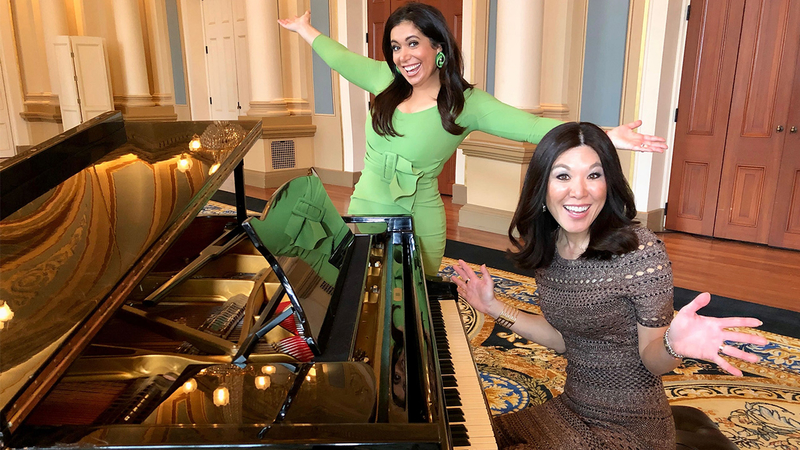 PHILADELPHIA (WPVI) -- Broadway Philadelphia is back! Watch our exclusive preview of the upcoming season and how things will look differently.

All of the theaters on the Kimmel Cultural Campus reopened their doors last fall. But it's in the New Year that things really kick into high gear.

This season of Broadway Philadelphia includes a number of Tony Award-winning shows coming to the Merriam Theater, the Forrest Theatre, and the Academy of Music.

while the curtain may not have risen in the 18 months that the Kimmel Cultural Campus was closed, the people here were hard at work. Ensuring that all of the buildings were clean and safe for returning audiences.

Subscribe to the Academy Gold VIP membership and you can chill in here before every show AND during intermission.

You also get access to a private entrance into the theater, private restrooms and complimentary drinks and snacks from Garces Events.

There are so many great shows that we're going to break this into parts And we start where many Broadway sets are born.

You can save money by creating your own custom package of at least three shows.

There's a lot more to choose from me. There are 5 more shows coming to the Kimmel Culture campus this spring and summer

Resident companies of the Kimmel Cultural Campus return to the stage

Broadway isn't the only thing coming back. The Kimmel Cultural Campus has a number of resident companies gearing up for the fall season as well.

The Kimmel Cultural Campus is home to four performing arts groups that make up a community for the artists, and an oasis for art lovers.

Shuttered through the pandemic, they are finally gearing up for live performances once again.

The Philadelphia Ballet, formerly the Pennsylvania Ballet, will put on a small performance at the Performance Garage this fall, then return to the Academy of Music just in time for the holidays and the traditional staging of George Balanchine's The Nutcracker.

Philadanco, founded in 1970 by Joan Myers-Brown, returns to the Kimmel Center in December, going into the more intimate Perelman Theater with their presentations of modern dance.

Opera Philadelphia has outdoor performances at the Mann Center, until returning to the Kimmel Cultural Campus in January -- including one that will add fireworks to the excitement.

The company also started a digital channel during the pandemic -- a venture started out of necessity, but one which they plan to continue moving forward.

After more than a year on the digital stage, The Philadelphia Orchestra welcomes Yo Yo Ma to its opening night celebration in October in Verizon Hall. During the pandemic, the musicians also staged small, community-based performances at places like Harriet's Bookshop in Fishtown, and the William Way LGBT Center.

Theaters have been dark since last March, but the Kimmel Cultural Campus has been anything but silent. The space was a safe haven for residents during the pandemic, and it's always been a source of education and inspiration for the next generation.

The return of live shows is vital for our collective psyche but it's also a critical part of Philadelphia's economic recovery from the pandemic. It's a $4.1 billion industry. The Kimmel Cultural campus alone brings in $585 million a year, according to the city's chief cultural officer Kelly Lee. That money, she says, supports 5,000 jobs while also boosting bars and restaurants in the theater district that rely on those patrons for business.

You can help the curtains rise again on the Kimmel Cultural Campus through a direct donation or just by going to see a show. Subscribers to this season of Broadway Philadelphia are being offered the option to swap out two shows (Hamilton excluded) from their package.