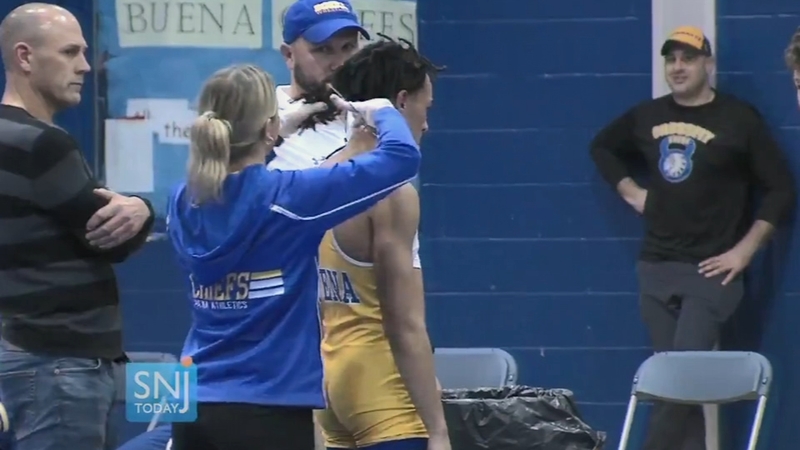 BUENA, New Jersey (WPVI) -- The New Jersey Division on Civil Rights is now investigating after a high school wrestler was forced to cut his hair before a match.

The incident has sparked questions about why the teen was called out for his hair.
EMBED More News Videos

Many say the only reason why there was a call to cut the hair was because of the color of the wrestler's skin.

Buena Regional High School wrestler Andrew Johnson, a junior, had to have his hair cut or forfeit the match.

In video taken of the incident, you can see his locks getting chopped off by a trainer.

The order to cut the locks came from referee Alan Maloney.

Back in 2016 Maloney reportedly called a fellow referee the N-word during an argument at a post-wrestling tournament get together.

We got mixed reactions when we spoke to several people, asking them to weigh in on the controversy.

Maylin Bauza, who goes to school with Johnson, and her mom say that Maloney went too far.

"His hair has always been like that, so for them to now bring it up is out of line," Bauza said.

Others argue Maloney was only sticking to the rules on hair.

"I just believe that the rules are the rules and that if his hair was below it should be, then he had to cut his hair. I don't think it was a racial issue," says Vineland resident Gina Fiocchi.

Well here's the rule. It states: "If an individual has hair longer than allowed it must be contained in a legal hair cover that is attached to the ear guards. The wrestler opting to wear a legal hair cover must wear it to the weigh-in procedure..."

It's reported Johnson had head gear, but not necessarily the exact one needed.

Now the state's governing body is investigating the incident, and they released a statement Friday afternoon, which reads:

"Regarding a situation concerning a Buena Regional High School (Buena, NJ) varsity wrestler and a wrestling referee, the NJSIAA has been in direct contact with school officials and is now awaiting official incident reports. A report also has been requested from the referee involved. In addition - and as per its formal sportsmanship policy - the NJSIAA has provided initial information to the New Jersey Division on Civil Rights and will continue to send updates as they become available.

"Regulations regarding hair length and legal hair covers for wrestlers are provided by the National Federation of State High School Associations (NFHS). At this point, the NJSIAA is working to determine the exact nature of the incident and whether an infraction occurred.

"Complaints against officials are heard first by the officials' association, and then can be appealed to the NJSIAA Controversies Committee. As a precautionary measure, given the degree of attention being focused on this matter, the NJSIAA will recommend to chapter officials that the referee in question not be assigned to any event until this matter has been reviewed more thoroughly in order to avoid potential distractions for the competing wrestlers."

So for the foreseeable future, Maloney will not be refereeing matches while the NJSIAA investigates.