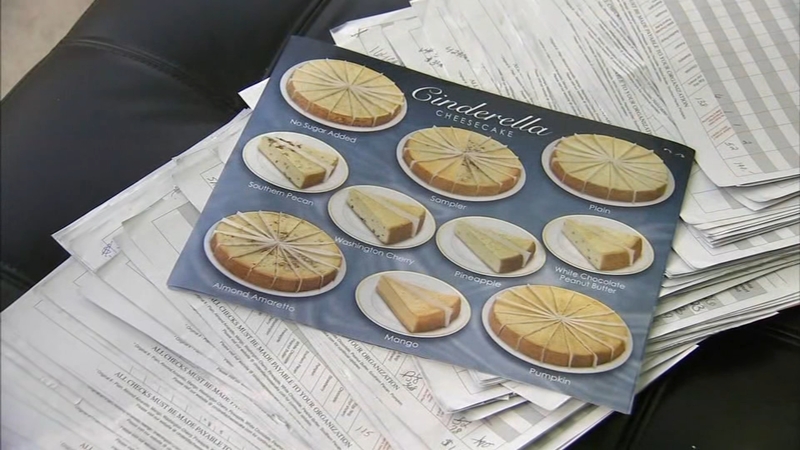 RIVERSIDE, N.J. (WPVI) -- It's called the Cinderella Cheese Cake Company, but some customers say their experience was not a fairytale ending. In fact, some say it was a nightmare.

"We won't use them ever again," said Laura Sauer.

Sauer, with The Lindenboro Chargers Cheering Squad, says the team ordered over 500 cheesecakes for its annual fundraiser from the company, but when it came time to collect, it was a big flop and the team never got its orders.

"It's not a Cinderella ending at all," said Sauer. "We ordered these cheesecakes and were having them delivered around Thanksgiving. They called us and told us that the boxes were contaminated and that we were not getting our cheesecakes."

Sauer says the company promised to make things right and deliver the cheesecake this month in time for Christmas, but again, the same thing-- no cheesecake.

The cheering squad is baffled because they have been using the Cinderella Cheese Cake Company for decades and all of sudden it seems the business has just gone dark.

"I reached out to them, I have called cell phone numbers, emails, no on one has called me back, no one has reached out to us. It is just nothing," Sauer said.

We went by the Riverside, New Jersey business to get some answers but it was all locked up, with signs on the door that said sold out and closed until further notice.

Those living nearby are surprised. They tell Action News just days ago, the place was hopping with customers.

"For the last couple of days there have been at least 20 to 30 people picking up just loads and loads of cheesecakes," said Riverside resident Khadir Carroll.

While it's not clear who was there picking up cheesecakes, it certainly wasn't anyone from the Chargers.

The team is now scrambling to return all the money collected and it must try to figure out how it will raise thousands of dollars so the squad can continue to compete.

"It is a disappointment, not only for them, but to the organization because now the girls are stressed out about competition season," said parent Elizabeth Abrams of Cherry Hill. "This is to offset their entry fee and funds for that and it's like, now what are we going to do?"