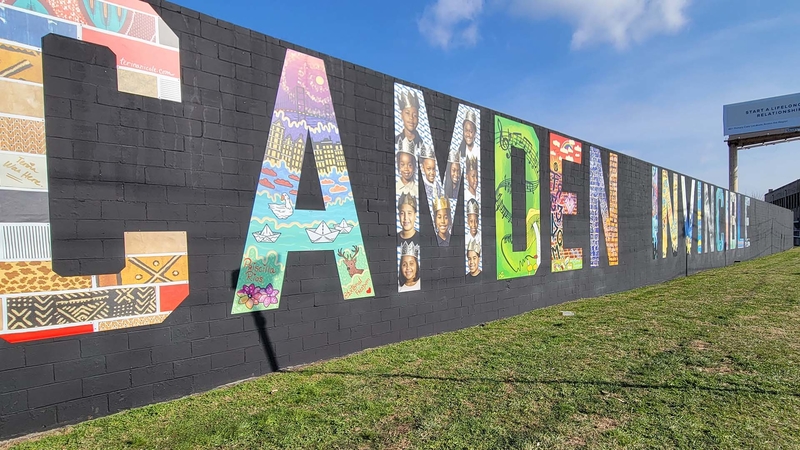 CAMDEN, New Jersey (WPVI) -- Local artists were tasked with drawing individual letters filled with literal and symbolic imagery of their city. When put together, they paint a bigger picture of the future of Camden.

"Camden Invincible" are the colorful words that will jump out at eagle-eyed drivers on Admiral Wilson Boulevard. Children's faces, silhouetted protesters, and the words of Walt Whitman are stenciled by the powerful phrase.

"I am born and raised in Camden and I love it here," said 21-year-old artist Priscilla Rios. "I want to set an example that there are diamonds in Camden and I feel like we should have more artwork with Camden residents, giving them the opportunities to put themselves out there."

Rios designed the letters, "A," and "E" in the word, "Camden," evoking images of the city's natural spaces, bustling trains, and the river-wide relationship with Philadelphia.

"If we just make Camden more colorful, maybe more people will actually want to keep our city clean and everything," she said.

Another artist contributing to Camden's growth is Terina Hill, who designed the letter, "C," in the word, "Camden." It is layered with diverse textures in the same pattern as many brick buildings around town.

"When I moved here six years ago, I could see and feel a city on its verge of recovering," said Hill. "

While in Camden, Hill opened the Fashion Design Center of South Jersey. Her goal is to connect city children with a chance to explore a career in the arts.
"I opened a business here and I provide mentorship and opportunities for students who are interested in the fashion industry," she said. "I've seen so much progress, it's phenomenal. I am so excited to be a part of that."

The mural project was made possible by Camden Community Partnership, Camden County, and St. Joseph's Carpenter Society. Mayor Vic Carstarphen said it's these relationships that make his city invincible.

Mayor Carstarphen took time to praise the aforementioned organizations in addition to the school district and police department. He noted that infrastructure and public safety are improving in the city through everyone's efforts.

Maxayn Gooden was brought to tears by the portrait of her son, who was murdered as a teenager.