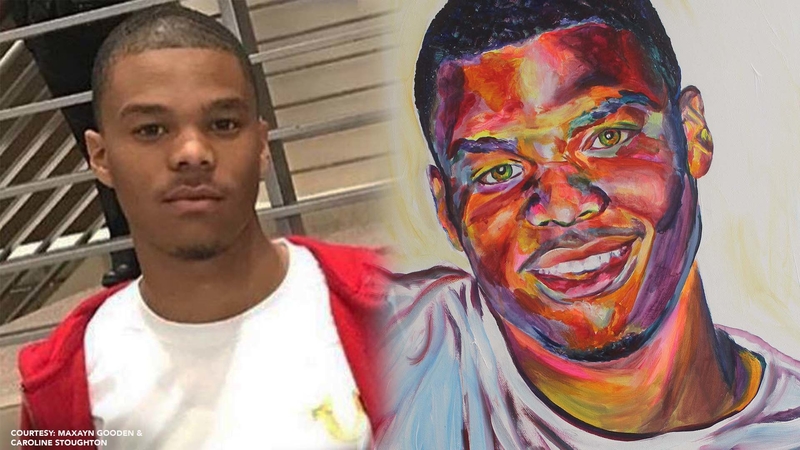 PENN VALLEY, Pennsylvania (WPVI) -- "All I can say is, when I first saw his picture, my eyes lit up," said Maxayn Gooden. "I was literally in tears. It was like he was right there with me."

Gooden, who is from Northeast Philadelphia, could only see her son in pictures and home videos after he was senselessly murdered in 2017. But through the Souls Shot Portrait Project, a radiant painting has allowed her to see her son in a new light.

Jah'sun Patton was 18 years old and preparing to graduate from Boys Latin Charter High School. An avid football player, he was looking to play the sport in college. To celebrate his acceptance letters, he visited his sister in Harrisburg, PA. But the Thanksgiving holiday trip would end in gun violence.

At the time, 30-year-old Derrick Butler shot and killed Patton during a dinner celebration. He would be apprehended and later sentenced to 25-50 years in prison for third-degree murder and unlawful possession of a firearm.

But none of that can bring Gooden's son back.

"He just killed my son out of pure jealousy," she said. "Never met my son until that day."

Thinking of her son's life, she decided to improve the lives of others. She founded Jahworld_18, a non-profit dedicated to continuing his legacy of leadership and athleticism. And most recently, she got involved with the Souls Shot Portrait Project.

Executive Director Laura Madeleine says it's needed now more than ever. According to Philadelphia's Office of the Controller, as of December 30th, there have been 559 homicides recorded in the city in 2021. This marks a 12% increase from the year prior. Their interactive map details 483 recorded fatal shootings.

"I was asked back in 2016 to come up with an exhibition in support of gun violence awareness," said Madeleine.

That year, the total homicide count in Philadelphia was 277.

"The artists would get to know the person and create portraits," Madeleine continued.

The matches-made-in-heaven have led to unforgettable pieces of artwork over the years, bringing comfort and healing to grieving families like Gooden's.

"It's a very hard thing to paint this photo of someone that I know I'm bringing life to," said artist Caroline Stoughton. "But it was like his aura was just so powerful that I didn't feel sad."

Stoughton envisioned Patton several years older in her painting and colored him with the warmth of the sun. His smiling face will appear among many others at this year's gallery located at Beth Am Israel in Penn Valley, Pennsylvania, just outside of the city. Tours are offered through online reservations.

"I hope one day we won't have to do Souls Shot portraits or the number grows smaller," said Gooden. "We don't want them to be just a statistic or just a number. We want people to see these people that are being taken away from us so soon."

To learn more about the Souls Shot Project, visit their website.

13-year-old Jayden Rodriguez is being remembered by his fellow baseball players as a guardian angel.