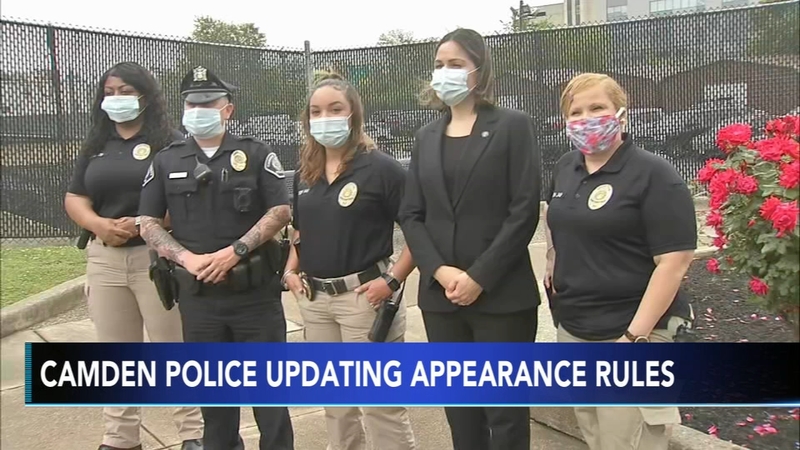 The Camden County Police Department department is adjusting some of the stringent and outdated appearance requirements that have been in place for years.

Among the changes, female officers can now wear stud earrings. Previously, no jewelry was allowed.

Both men and women can wear their hair in braids, dreadlocks or short ponytails.

Officers can color their hair and wear it down. The hair must be able to be pulled back to the top of the shoulder blades for uniformed officers and not interfere with wearing headgear that's part of the police uniform.

Female officers are allowed to wear colored nail polish and have nails extend slightly beyond their fingertips.

"We are ecstatic about being able to wear our hair down and earrings because it's basically like a softer approach," said Lieutenant Vivian Coley, commander of the Detective Bureau for the Camden County Police Department. "We interview folks. We deal with tense situations, sexual assaults, domestic violence, so it's easier to be able to be free."

The new personal grooming and appearance standards were developed through discussions over the last several months with uniformed officers and detectives.

The new standards are designed to be more reflective of modern norms and styles.

The hope is to improve recruiting efforts. The department doesn't want young men and women thinking of a career in law enforcement to be turned off by overly stringent and dated grooming and appearance rules.

"The goal in updating these standards was to make sure that we maintain a professional look for our officers that is fitting for a police agency while allowing officers to be current and comfortable in the styles that fit them individually," said Chief Joseph Wysocki. "And it was important for us to involve officers in the process of formulating these new standards so that the rules we have put in place are the best fit for our department."
Report a correction or typo
Related topics:
camden (new jersey)camden policesocietypolice
Copyright © 2021 WPVI-TV. All Rights Reserved.
CAMDEN POLICE
Camden police department swears in 1st Latino police chief
NJ native launches "The Masked Melanin Market" in Camden
Former NJ police chief: Officers are guardians, not warriors
Camden Co. police seen as model for law enforcement evolution
TOP STORIES
2nd arrest made in deadly shooting outside Pat's Steaks
Suspect ID'd in deadly hit-and-run rampage in Philly, Montco
Phillies postpone game against Nationals amid COVID-19 outbreak
Stranger falls capturing marriage proposal. Now she needs your help
School districts across Delaware Valley react to CDC recommendation
9 new victims identified in Bucks Co. sextortion case
Woman caught on racist tirade in NJ hotel to be held until trial
Show More
NJ officials recommend masking in indoor settings with increased risk
Moratoriums on evictions, foreclosures ending soon. Here's what to do
Athletes and anxiety: How mental health plays a role in performance
CHOP doc on rise of COVID variant: 'This was all preventable'
New look for Eagles, Ertz during 1st training camp practice
More TOP STORIES News