Father, son save nurse when no one else stopped after crash on Pa. Turnpike

Pamela Jones, a nurse, mom, and grandmother, says she doesn't remember much from the accident.
WPVI
By 6abc Digital Staff and Bryanna Gallagher 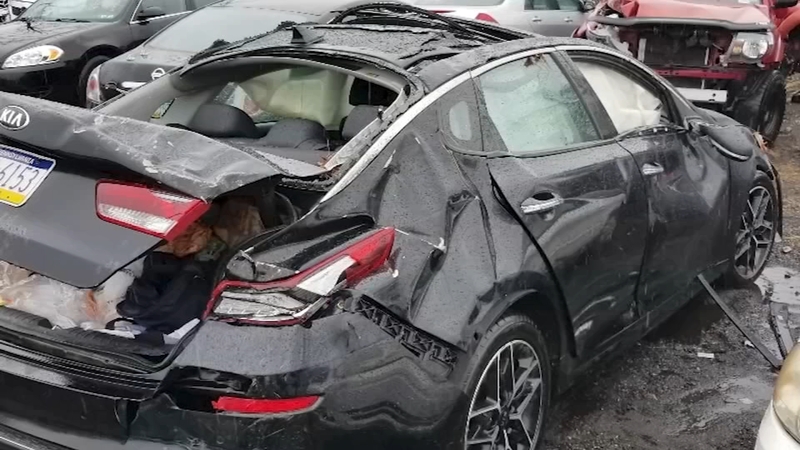 Father, son save nurse after crash on Pa. Turnpike

FORT WASHINGTON, Pennsylvania (WPVI) -- A nurse was driving home after seeing a patient when she was hit by a car switching lanes on the Pennsylvania Turnpike Tuesday night.

The accident caused her car to spin, flip over, and crash into an embankment. But she survived, thanks to what she calls an angel.

Pamela Jones, a nurse, mom, and grandmother, says she doesn't remember much from the accident.

Jones was traveling westbound on I-276 around 8:30 p.m., but she's crediting her survival to Mike Lottier and his son Drew.

Pamela Jones, a nurse, was on her way home after a day of helping others. On Tuesday she got into a car accident near Fort Washington and was trapped. Dozens of cars sped by, and only one stopped to help.

Hear from the good samaritans who saved her, tonight at 6 on @6abc pic.twitter.com/NRwinE1kQc

"Mike Lottier and his 15-year-old son, they were my angels on this earth, and I am forever grateful to them," said Jones.

Mike and Drew Lottier don't consider themselves heroes though.

"I just couldn't imagine if I was in that position and no one stopped for me," said 15-year-old Drew Lottier of La Salle High School.

"There must have been 150 cars that drove by. He said, 'Nobody stopped? I can't believe nobody stopped,'" said Jones.

Debris was scatted across the turnpike, and her sunroof was shattered.

Drew stayed with Jones to help calm her down while his dad called 911.

When they approached her car, Mike said they could hear her screaming for help. They knew someone was in need.

He says it's a miracle she's alive.

"When someone's in need were there," said Mike.

Returning home safe is something we may take for granted.

“I just couldn’t imagine if I was in that position and no one stopped for me.” -Drew Lottier

Drew & his dad Mike were the only people who stopped to help when they saw a bad accident on 276. They said dozens drove by, the woman they saved is calling them her angels. @6abc pic.twitter.com/PfJNr69aMv

Jones says she gets thanked by those she helps every day but adds
it was her turn to thank those who helped her.

Although she calls Mike and Drew her angels, she's thankful for the first responders who also came to the rescue.

"Our firefighters, our police officers, EMT crews, they are so necessary people don't know how necessary they are unless they need them. I needed them. They were all there for me, all of them," Jones said while tearing up.