After injury, Underwood returns to stage in strong form 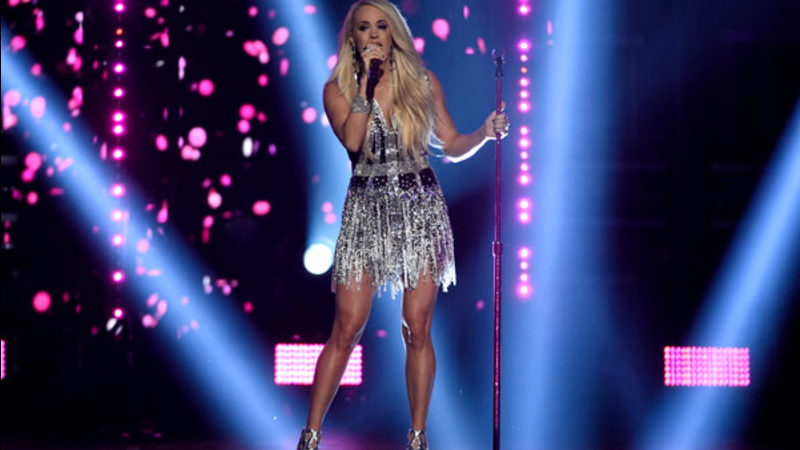 Carrie Underwood made her first television appearance since injuring her face in strong form at the 2018 Academy of Country Music Awards, owning the stage with her powerhouse vocals.

Underwood, in a glittery dress, returned to the stage Sunday like an A-List veteran when she performed her new song, "Cry Pretty," earning a rousing, and long, standing ovation from the Las Vegas audience. Underwood injured her face and wrist last year due to a fall at her home.

Following the performance, she immediately won vocal event of the year for the dance-infused country song, "The Fighter," with Keith Urban.

"Thank you for having me," Underwood said to Urban onstage. "I am still kind of shaking right now," she added, appearing teary-eyed.

Sunday also marked a memorable day for Chris Stapleton: His wife gave birth to twin boys, he celebrated his 40th birthday and he won album of the year at the ACMs.

Stapleton didn't attend the show, but host Reba McEntire announced the birth of the boys when his Grammy-winning album, "From A Room: Volume 1," was named top ACM album.

Stapleton, who released two top-selling albums last year, is the top nominee with eight. This year marks his first nomination for entertainer of the year, where he will battle Garth Brooks, Keith Urban, Luke Bryan and Jason Aldean, who has won the honor the last two years.

Lambert also made history Sunday: Her win for song of the year helped her surpass Brooks and Dunn as the most decorated act in ACM history with 31 wins.

"Thank you, guys, so much for sharing my broken heart with me," Lambert said onstage, standing with "Tin Man" co-writers Jack Ingram and Jon Randall.

Lambert is the current record holder for most consecutive wins for female vocalist of the year; this year her competition in the category includes Underwood, McEntire, Maren Morris and Kelsea Ballerini.

Lambert helped the country music community, returning to Vegas six months after a massive shooting in the city, remember the victims not in song, but with words to open the ACM Awards.

Lambert said the world can be "united through the healing power of music," while Bryan said "music helps us remember what really matters in life." At the MGM Grand Garden Arena, Morris said music "makes us stronger" and Thomas Rhett said music gives us "a chance to rejoice."

Aldean closed the emotional moment, saying in respect to the victims and music fans, "we celebrate the music tonight. America, this is your ACM Awards."

Last October a lone gunman killed 58 people at country music's Route 91 Harvest Festival in Sin City, becoming the deadliest mass shooting in modern U.S. history. The ACMs, however, is typically known as the genre's biggest party of the year.

Florida Georgia Line's Tyler Hubbard wore an all-red ensemble and Brian Kelley was in all-white when they hit the stage with pop singer Bebe Rexha to perform the massive hit "Meant to Be," which is spending its 19th week on top of Billboard's Hot country songs chart. It ties Leroy Van Dyke's "Walk On By" as the third longest-running song of all-time on the chart.

McEntire, who will also hit the stage, is hosting the show a year after Bryan and Bentley did the job.

"It takes one woman to do the job of two men," she said, earning a rousing applause.

Rhett earned six nominations, Urban and songwriter-producer Shane McAnally are up for five awards, and Lambert and Morris will each compete for four honors.

Little Big Town, Midland and Sam Hunt, whose "Body Like a Back Road" is the longest-running No. 1 song of all-time on Billboard's Hot country songs chart, all have three nominations each.